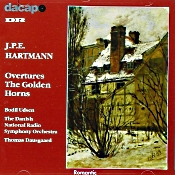 Danish composer Johan Peder Emilius Hartmann (1805-1900) lived nearly the whole of the nineteenth century. Think of that: Haydn was still alive when Hartmann was born, and Mahler was just finishing his Fourth Symphony when Hartmann died. Although not so popular anymore, during most of this time Hartmann was at the center of Danish musical life as an organist, composer, and co-director the Copenhagen Conservatory. His works include operas; ballets; vocal, orchestral, organ, and piano pieces; popular songs; and chamber music.

The five overtures featured on this 1999 release from Maestro Thomas Dausgaard and the Danish National Radio Symphony Orchestra reveal a distinctly Romantic leaning, as we might expect, yet a modern, adventurous spirit as well. There is nothing particularly remarkable about any of the overtures, but they are clearly a step toward tone painting and even impressionism, and the conductor and orchestra give them full measure.

The five overtures are Yrsa, Axel og Valborg, Hakon Jarl, Correggio, and Guldhornene. He based most of them on Danish folk lore, poetry, and legend. Of the five, two stand out for me: First, there is Guldhormene, or The Golden Horns, because it is background music for the recitation of a poem by Adam Oehlenschlager, one of Denmark's "Golden Age" dramatists. It is not the longest work on the disc, but it covers the most sweeping ground. To be honest, though, I could have done without the recitation by Bodil Udsen and just enjoyed the music by itself. The second standout is Hakon Jarl, a descriptive work that tackles no less than "the struggle of Heathendom in Norway against Christianity, and the victory of the latter under Olaf Trygvason." Like the other overtures, it begins with a slow, moody introduction soon developing into a series of contrasting sections that become quite exciting and contain some of Hartmann's most imaginative tunes.

For those listeners seeking a more sustained and substantial output from Hartmann, the CPO label simultaneously issued a two-disc set of his ballet The Valkyrie, with Michail Jorowski and the Radio-Sinfonie-Orchester Frankfurt. In four acts and based on a story by August Bournonville, the work is somewhat bombastic but highly descriptive. As the title suggests, it is all about gods and warriors and Valkyrie of ancient Norse mythology. Music scholars consider it one of the great ballets of Danish theater. Although it did not particularly impress me on my one and only listening, ballet fans should find much to enjoy in its 103 minutes. Whether Maestro Jorowski helped or hindered my appreciation of the music, I could not say.

Both Dacapo's and CPO's sound is remarkable in its unremarkableness. This is not meant as a criticism, just an observation. The sonics appear moderately distanced and slightly veiled, with passably good depth of field, little deep bass, and rather mundane dynamic impact. Like Hartmann's music, nothing really stands out, but that is the way it probably should be. Unless the listener is an audiophile more interested in how the discs sound than in the music itself, the albums should satisfy because nothing calls attention to itself. These are unassuming releases of unassuming music.

Email ThisBlogThis!Share to TwitterShare to FacebookShare to Pinterest
Labels: Hartmann