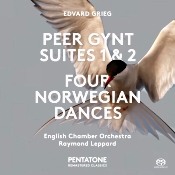 For many years now, some of my favorite recordings of Grieg's music for Peer Gynt have been those of Oivin Fjeldstad with the London Symphony Orchestra (Decca, Classic CD, and other labels), Sir Thomas Beecham with the Royal Philharmonic Orchestra (EMI/Warner or Hi-Q), and the one under consideration here, Raymond Leppard's 1975 album of suites recently remastered on SACD by Pentatone.

People today probably know Norwegian composer Edvard Grieg (1843-1907) best for his incidental music to Henrik Ibsen's play Peer Gynt as well as for the Piano Concerto, although my guess is that listeners familiar with Peer Gynt know it from one or the other of the concert suites rather than the complete incidental music. Here, we get both suites, but if you want the complete score, you'll have to go elsewhere, to Per Dreier and the LSO (Unicorn), perhaps, or Neeme Jarvi and the Gothenburg Symphony (DG).

Anyway, the suites are enough for most folks, and, as I say, Leppard's handling of them is as good any. Grieg himself extracted the two suites from the complete score, but nobody published the original score until 1908, a year after the composer's death. So maybe that's why we know the suites better than the complete music. In any case, the suites contain all of the most-popular music from the score, four entries in each suite: "Morning Mood," "Aase's Death," "Anitra's Dance," and "In the Hall of the Mountain King"; then "The Abduction," "Arabian Dance," "Peer Gynt's Return," and "Solveig's Song."

Leppard's way with this material is always of the most refined quality. He never over dramatizes the music or over glamorizes it. Instead, he lets each movement unfold at a natural pace, using nuanced pauses and contrasts to underline the pictorial characteristics of the score. Leppard always has an eye toward atmosphere rather than pure theatricality; so, yes, there are other more exciting versions of this music you can find, but none as thoughtful.

As a coupling, Pentatone offer Grieg's Four Norwegian Dances, also nicely done up by Leppard and his players. Note, though, that the latter Philips disc also includes these items, plus an additional twenty-four minute selection from Grieg's Old Norwegian Romance, Op. 51, recorded by Leppard half dozen years later with the Philharmonia Orchestra. Apparently, Pentatone decided that the material on the original disc was enough, or perhaps the later recording wasn't in surround sound.

The recording provides probably still the best sound you can obtain in this music. The microphone placement gives us just the right amount of space between the instruments to create the illusion of a small orchestra in front of us in a large hall, with just the right amount of width and depth. What's more, the warmth of the acoustic heightens the illusion, without losing too much detail and definition; the bass is taut and deep; and the dynamics are strong.

Since I also had on hand the Philips disc of this same recording, I put it into the regular CD player and compared it side-by-side with the SACD 2-channel layer of the newer remaster. After some fiddling with level balances, it was pretty hard to tell the difference. While the SACD was perhaps a tad smoother and fuller overall, it could have been my imagination. However, since the Philips disc may prove hard to come by now that Philips have folded shop, the point may be moot. The Pentatone is a good listen.