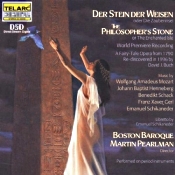 The longer we live, the less we know. You'd think that after two hundred years, about everything that we could possibly learn about Wolfgang Amadeus Mozart would have surfaced. But not so. The "et al" in the heading means that only recently did Professor David Buch discover conclusive evidence that near the end of his life Mozart collaborated with four other composers to produce The Philosopher's Stone, a singspiel or comic opera with dialogue. In 1996, Dr. Buch found a previously unknown copy of the work with the names of its contributors clearly marked on the top of each page. For a long time music scholars had thought that Mozart might have had something to do with the opera, but when Mozart's name appeared above three of the numbers, the professor had his proof.

The four other composers are Johann Baptist Henneberg, Benedikt Schack, Franz Xavier Gerl, and Emanuel Schikaneder. The year was 1790, a year before Mozart would publish his Magic Flute. The question is, why would Mozart have contributed his talents to a production with other composers and take so little or no credit for himself? There are several possible answers. The foremost is that he needed the money. More important, though, he probably just enjoyed working with the others. The same team that produced The Philosopher's Stone would shortly thereafter produce Mozart's own Magic Flute, so these men were clearly friends and business associates. In any event, it is important to find Mozart's name attached to anything not previously attributed to him, and Telarc do a splendid job giving us a world premiere recording of the work.

The Philosopher's Stone, subtitled The Enchanted Isle, was apparently a popular piece of entertainment for its time, remaining in the repertory of the Theater auf der Wieden for about twenty-four years and receiving many more performances throughout Germany and Europe during that time. The work sounds unceasingly cheerful, based on much the same fairy-tale material as The Magic Flute. It's all about sylvan landscapes, shepherds and shepherdesses, love and lovers, demons and evil spirits, jealousy, dwarfs, and a trial by bird song. It's a plot that one must revisit frequently for any comprehension, but the arias, duets, ensembles, and musical interludes are fun, if frivolous, while they last.

Telarc's producer James Mallinson does things up right by employing Martin Pearlman and his period instruments band Boston Baroque and a worthy cast of singers to head up the entertainment. The playing and singing are splendid.

Then to top things off, engineer Jack Renner ensures that the sound is ultra smooth. However, I also found the sound a bit dry and sterile. There is not a lot of sheen at the top end; and, disconcertingly, as people walk about the stage their voices change in dimensionality but we never hear their footsteps. In the old Culshaw days at Decca, the listener was aware of almost all stage movements, lending the proceedings a greater air of realism. Oh, well. Mercifully, the Telarc recording remains free of its patented big bass drum, and for the most part the sound is clean and clear.

The Telarc engineers accommodate the opera itself on two CDs, with a third, bonus disc devoted to a short discussion by the conductor on the importance of Mozart's contributions to the work.

Overall, it's a release worthy of investigation by anyone interested in classical music, Mozart, light opera, or musicology.