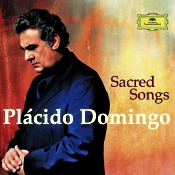 With the release of Sacred Songs in 2002, the Spanish singer and conductor Placido Domingo proved once again he was among the greatest singers in the world. Given the absence from the scene of his primary competition, Luciano Pavarotti, this was still the story at the time. Today, many years later, Domingo's voice may not be what it was, but his place in the pantheon of great tenors nevertheless seems secure.

In 2002 Domingo continued to have a good range and a smooth, expressive style, perhaps more so in his prime than Pavarotti. Not that I have anything against the latter singer, mind you; he was and always will be a towering figure in the world of opera, and I'm privileged to have been alive to hear him sing. But favorites remain favorites.

Anyway, in Sacred Songs, Domingo performs sixteen songs of a sacred or religious nature, some of them familiar and some of them not, with vocal contributions by Norwegian singer and actress Sissel Kyrkjebo and the accompaniment of Marcello Viotti and the Orchestra Sinfonica di Milano Giuseppe Verdi.

The first item, "Ave Maria," for instance, is the familiar Biblical "Hail Mary" set to the popular instrumental intermezzo by Pietro Mascagni from Cavalleria Rusticana. It's kind of odd at first hearing words to the tune we all know so well without the words, but it works well enough; as does his vocal partner in the song, Sissel Kyrkjebo. Her voice is not nearly so full and operatic as Domingo's, but the ethereal quality she projects nicely complements his more robust outpourings.

The listener will also no doubt recognize Cesar Franck's "Panis angelicus" and Charles Gounod's "Sanctus" and Handel's "Ombra mai fu." The listener might not recognize Fermin Alvarez's "Plegaria" ("Los Tres Amores"), however, or Placido Domingo, Jr.'s "Ave Maria," but that's neither here nor there. And so it goes.

Two minor quibbles: I probably could have done without Richard Rodgers's "Climb Ev'ry Mountain" from The Sound of Music, which seems more than a little out of place among the more exalted "sacred" melodies that surround it, and I missed Schubert's famous "Ave Maria," which I guess Domingo figured everybody already has in multiple copies. Still, it would have been helpful to have it along with these others, all in one place.

DG's sound caps the climax, so to speak, by being rich and smooth, with perhaps not the epitome of solid front-to-back imaging but well balanced and warmly ambient in any case. Domingo is clearly out in front of the orchestra but never too very close up, and his voice is never hard, harsh, or bright.

In short, Sacred Songs is an all-around lovely album and makes for an easy crossover selection.

Email ThisBlogThis!Share to TwitterShare to FacebookShare to Pinterest
Labels: Domingo