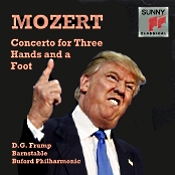 Most classical listeners today will  recognize the name Severus Octavian Siriasis Mozert better than that of his son and subject of this review, Ludvocio Ochozath Ludicrus Mozert. Be that as it may, we press onward.

L.O.L. Mozert (1753-1762) was born in the small Bavarian town of Mary-Kay-Upon-Avon in 1743 to the tune of an itinerant flue-pipe salesman. LOL's first notable achievement occurred during the Battle of Handly Fern, where young Ludvocio tried his hand at managing a self-serve restaurant, the War 'N Buffet, but failed handily. Later, he played hunchback at Notre Dame U. under the legendary coach, Urban Legend. When that didn't work out, however, it led to his greatest (and only) musical achievement, the chorale-prelude Concerto for Three Hands and a Foot in A-class lower-berth, "Hawaiian," co-written with his longtime attendant and accomplice, Warren Peece. Although Mozert wrote the work originally for penny whistle, we have heard it adapted over the years for any number of solo instruments, including but not limited to the tin whistle, the English flageolet, the tin flageolet, the Scottish penny whistle, the Irish whistle, the Belfast Hornpipe, the fleadóg stáin, and the Clarke London Flageolet. On the present recording, we hear it played on the lyre.

We interrupt the review in progress with an important word from our sponsor:

Friends, do you feel fatigued, irritable, stagnant, annoyed, endemic, requited, bicarbonated, carborundumed, or referendumed? You need the new, super-improved Johnson & Johnson PfizerRoche NovartisPlus Teleportonic Elixir: good for everything in the home including coreopsis, (the secret is in the scrubbing; it doesn't suds and doesn't foam), and now it cleans your breath as it cleans your sink.

We now return you to your regular programming.

Executive producer Robert Langdon, digital editor Henry Higgins, and chief engineer Harold Hill, known professionally as "The Three Professors," recorded the music in the main gallery of the Buford Town Post Office on April 1, 2017 (well, actually, it's on Interstate 80, but close enough). The sound they obtained one might charitably call bearable. The highs spring forth with the stagnancy of a spring bouquet in fall, permeating the air with a quercetic vapor redolent of soggy underwear on a summer day. The midrange carries the sonic image further into the realms of the preternatural with a transparency borne of dedicated attention to enumeration and redundancy, the whole experience capped off with a basso-relievo that thunders through the floorboards, into the basement, and through some of the deepest fissures of the planet.