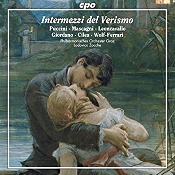 Classical music lovers, especially opera fans, already know what intermezzi (or intermezzos) are, but for those who might be a little unclear on the concept, my Random House Unabridged Dictionary defines an intermezzo as "a short dramatic, musical, or other entertainment of light character, introduced between the acts of a drama or opera. Or a short musical composition between main divisions of an extended musical work. Or simply a short, independent musical composition." In the case of this album, we're talking about the first definition.

Further, opera fans will surely already know the meaning of verismo, but, again, the dictionary defines it as "the use of everyday life and actions in artistic works: introduced into opera in the early 1900s in reaction to contemporary conventions, which were seen as artificial and untruthful." Purists may balk at some of the titles included on the program as not being entirely "intermezzi" or pure "verismo," but for most of us the dictionary definitions are broad enough to cover most of the ground here.

The present album provides a dozen intermezzi--some of them quite famous, others not so much--from as many operas, all performed by Lodovico Seiche and the Graz Philharmonic Orchestra. The following is a list of the disc's contents:

All of the music appears beautifully and sensitively played by Maestro Zocche. What's more, the Graz Philharmonic responds splendidly to his direction; just don't expect them to sound as rich and luxurious as their more illustrious neighbors in Vienna. However, my own reaction was that perhaps Maestro Zocche interpreted the tunes a little too beautifully and sensitively, leaving out some of the passion and fire of the pieces. It is all quite pleasant and relaxing, but it seems to me to omit the spark it needs, particularly if one is calling it "verismo," which ought to indicate a more practical and less Romantic approach.

Nevertheless, more than a few selections stood out as worthy of attention. The opening Preludio, for example, projects a sweet, graceful, lyrical charm. The following La Tregenda is appropriately robust. In neither case, however, did I feel the fire I sometimes find in other performances. But I quibble; Maestro Zocche does a splendid job for the most part.

The intermezzo from Suor Angelica displays a proper tenderness; the familiar music from Cavalleria rusticana is gorgeous if a bit sentimental; the Pagliacci intermezzo seems a tad overdramatic; and so it goes, with my nit-picking all along the way. Let it suffice that you probably won't find the music performed any better than here, not if you're looking for all of it in one place, at any rate.

Finally, I'm not sure for whom the producers of the album intended it. Surely, the dedicated opera fan will already have most if not all of this music already in his or her collection. Lovers classical orchestral music may even have similar discs. I suspect the producers aimed their program more toward casual music listeners looking for tranquil, soothing background music, and the generally placid performances would seem to back up this possibility. Whatever, it's fine music, well enough presented.

Producers Peter Ghiradini and Giovanni Prosdocimi and engineer Peter Ghiradini recorded the music at Oper Graz, Austria in February 2014. As with many other CPO recordings over the years, this one sounds quite nice. There is good clarity and definition, good orchestral depth, and fairly wide frequency and dynamic ranges. Imaging is neither too close nor too distant. In short, it's a first-class recording.