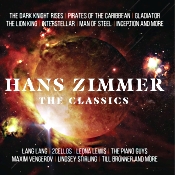 I couldn't help thinking of that exchange in Lewis Carroll's Through the Looking Glass when I saw the title of this 2017 Sony release. Was composer and record producer Hans Zimmer (b. 1957) conducting classical music or classic film scores? Did the title refer to the music of Hans Zimmer as "classic," or did it refer to the movies for which Zimmer composed the music as classics? Well, maybe a little of the latter, although to call either the movies or the Zimmer soundtrack music for them "classics" may be a little hyperbolic. I suggest we give the movies and the music another fifty years before calling them "classics."

Anyway, what we have here is almost an hour of bits and pieces of music Zimmer composed for nine popular motion pictures. Which is part of the problem: Nothing lasts for more than a few minutes. So it's not as if we're getting major chunks of each movie's score. It's more like a quick hit parade of some of Zimmer's bestsellers. The fact is, Zimmer has composed music for over 150 films, so nine isn't really a big number,

Whatever, Gavin Greenaway, John Ashton Thomas, Stjepan Hauser, and Luka Sulic arranged each brief selection for the present album, and composer Wibi Soerjadi transcribed yet another of the tracks. Then Sony got some of their top recording artists (Lindsey Stirling, The Piano Guys, Lang Lang, Till Bronner, Tina Guo, Amy Dickson, Leona Lewis, Maxim Vengerov, Khatia Buniatishvili, 2Cellos, and Robert Saver) to help perform them, accompanied by Mr. Greenaway and the Czech Philharmonic.

Here's a rundown of the complete listing:

How much you like any of this material and whether there is enough of it to satisfy you may, of course, depend largely on your own taste. For me, it was too little of any one thing, and it caught my attention only in short spurts. There's no denying, however, that the performers are up to their tasks, everything sounding just fine.

My own favorites among the tracks include the various themes from Pirates of the Caribbean for their undeniable panache; the main theme from Crimson Tide for its rising dramatic effect; "Time" from Inception for its atmospheric attributes; "Now We Are Free" from Gladiator mainly for Leona Lewis's contribution; "Light" from The Thin Red Line for its lyrical intensity; "Mombasa" from Inception for its rhythmic pitch. And the winner is: Inception. I think I might have preferred Greenaway and the Czech players doing an entire album of music from just this one film.

Producer Chris Craker and engineers Nick Wollage, John Chapman, Shane Edwards, Dave Rowell, Chris Connor, Robert Sattler, Benoit Bel and Philipp Nedel recorded the music, and Sony Music Entertainment released the album in 2017. The sound is OK, if in its own pop-music fashion. It's close and appears compartmentalized, with selected instruments well out in front, spotlighted. Definition is good, frequency balance favors the upper midrange, dynamics are strong, and orchestral depth is moderate. There's also a slightly abrasive quality about some of it, too, a bit of raspiness at the higher end and an overall hard metallic quality. I doubt anyone will care.

Email ThisBlogThis!Share to TwitterShare to FacebookShare to Pinterest
Labels: Zimmer