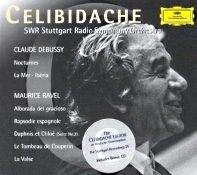 Sergiu Celibidache (1912-1996) was the famous Romanian conductor, composer, and teacher who died without ever having released any of his recordings (or none that I know of) in his lifetime. In the words of his son, "My father always attempted through music to stimulate the individual's creativity (in the making of it but also in listening to it, both being ways of participating in the creative process), and he therefore, justifiably, feared the CD's inability to do more than repeat itself in a diminished, and thus false, reality, reducing the individual's reactions to a mechanical and paralyzed stillness instead of promoting creative spontaneity." To which I can only respectfully disagree.

The son goes on to say, "According to my father, the correct tempo cannot be determined by a metronome marking but, rather, depends on other criteria in the score and, of course, on the acoustics of a particular hall. This tempo fluctuates according to the complexity of the notes played (and heard) and their epiphenomena (the secondary sounds resulting from the division of the main note after being played on any instrument). In short, the more notes (and consequently more epiphenomena), the more time needed for them to develop and to be 'digested' acoustically. Thus, the richer the music, the slower the tempo." This is to say that Celibidache often played things very slowly. The son further states, somewhat defensively, that his father's slow tempos may not sound like much on a recording, other than just being slow, but in a live performance they were just right for the occasion. Fair enough.

Anyway, while all that may be so, on these three discs of music by Debussy and Ravel, released posthumously, the music merely sounds slow. In fact, it sometimes sounds laboriously slow, lugubriously slow, eccentrically slow. The opening moments of Iberia, for instance, seem almost bizarre in their deliberate and sluggish pace. I don't mean to suggest, however, that I didn't enjoy at least a little of Celibidache's music; indeed, there is a tranquillity about some of it that I found quite satisfying. However, for the most part, I felt little life in much of the Debussy and only the occasional flicker of vitality in the Ravel.

In fairness, too, many of Celibidache's fans no doubt would pronounce these interpretations filled with tremendous heart and soul, even though I found them largely soulless. Yet such is the case for all art that one must interpret subjectively. One person's treasure may be another person's trash and vice versa.

What's more, the technical aspects of these 1973-1980 live recordings did little to help my appreciation for Celibidache's music making. The recordings sound more noisy in terms of audience reactions, coughs, wheezes, and rustling, than I can remember in most major releases, and they have a degree of background hiss that that people might have found unacceptable even before today's digital standards. Moreover, the sound appears constricted and one-dimensional much of the time.

Admittedly, Celibidache never meant to release these recordings at all, but here they are, and what can one do except comment on them? DG also include a bonus disc of excerpts from the conductor's rehearsals, spoken in German, which also did little to impress me as I do not understand German. Maybe the conductor was right after all: Listeners should probably have heard him in person to make an impartial evaluation of his talents.

To listen to a few brief excerpts from this album, click on the forward arrow: