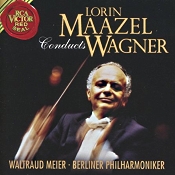 Yes, there was life after Karajan. Even without its former maestro fussing about, the Berlin Philharmonic still had a gorgeous, deep-throated sonority about it. Although at the time of these recordings, 1998-2000, Claudio Abbado was leading the Berlin orchestra, their playing under the late Lorin Maazel (1930-2014) nevertheless sounded effortless, creating a monumentally big, full, rich sound. In fact, the BPO sound appears so together, it is like listening to a single great instrument playing rather than a hundred instruments in unison. RCA have captured the orchestral sonics in warm, smooth, slightly soft dimensions, very easy on the ear and, if anything, adding to the grand scale of the proceedings. The acoustics are nothing like the bright glare presented on so many early digital releases in the same venue under Karajan.

The performances, too, are on an appropriately lofty plane, coming close to but not quite realizing the grandeur or fervor of my favorite Wagner interpretations under Otto Klemperer (EMI), Bernard Haitink (Philips), Erich Leinsdorf (Sheffield), or Leopold Stokowski (HDTT or RCA), but they're close.

Maazel opens with a huge rendition of the Tannhauser Overture, leading into a revised edition of the "Venusberg-Bacchanale." There follows a quite exciting version of Der Fliegende Hollander Overture; then a sweet and noble Act I Prelude to Lohengrin; and a dynamic Gotterdammerung "Funeral March." The first disc concludes with the Prelude to Tristan und Isolde and finally "Isoldes Liebestod" sung by mezzo-soprano Waltraud Meier.

OK, Maazel is quite a good Wagner conductor, but note that Klemperer and his Philharmonia players convey both size and greater urgency in these works, and they were recorded by EMI with better definition and available at mid price, albeit on several discs. For a single collection, though, this new Maazel album is a fine effort and an easy recommendation. 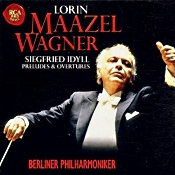 As I said about Maazel's first volume of Wagner music with the Berlin Philharmonic, there was definitely life after Karajan. In the second volume, sold separately, the BPO continued to sound more mellifluous, more imposing, more majestic than almost any orchestra in the world, made to appear all the more so given RCA's ultrasmooth, ultra-velvety sonics. With Maazel's unusually broad view of tempos and knack for grandly emphasizing a point, the result is Wagner on an even loftier level than usual.

Oddly, given their prominence, the two opening pieces I thought were the weakest interpretively. The Rienzi Overture is slow to the point of plodding, and the Lohengrin Act III Prelude never really catches fire. But then Maazel comes into his own with the Faust Overture, which combines cool deliberation with fiery execution. Next, his Die Meistersinger Prelude comes off with appropriate ebullience and aplomb, followed by the centerpiece of the album, the Siegfried Idyll, delicate and pensive, the famous birthday gift from Wagner to his wife, Cosima. The program concludes with Maazel's best performance of the lot, "Siegfried's Rhine Journey" from Gotterdammerung. It allows the conductor to exhibit freely his baronial, dramatic flair while maintaining a fair degree of control.

Maazel is a fine conductor who grew into the role of elder statesman gracefully, though losing some of the spark that once marked his conducting. I find Haitink, on a similarly comprised, mid-priced Philips recording with the Concertgebouw, more to my liking for his greater spontaneity. Otto Klemperer on a pair of mid-priced EMI issues is equally noble yet displays more individualism; and his EMI engineers provided a shade more sonic transparency. Still, these discs will not disappoint Maazel's fans, and it's hard to fault the Berlin players in anything they do.