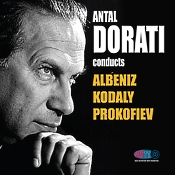 If you're an audiophile, I don't need to tell you that a lot of folks have prized the mid 1950's to early 1960's recordings from RCA "Living Stereo" and Mercury "Living Presence" as collector's items. So it's always a pleasure to hear another of the latter recordings from this era remastered by HDTT (High Definition Tape Transfers), this time with Antal Dorati and the Minneapolis Symphony from 1956-57 and the London Symphony from 1957.

First up are five of the twelve piano "impressions" from Iberia by Spanish composer and pianist Isaac Albeniz (1860–1909), orchestrated by E. Fernandez Arbos. Color and atmosphere fill the music, and those are things Hungarian-born conductor Dorati (1906-1988) did exceptionally well. This is important because Arbos's orchestration is lush and varied, and Dorati does it justice throughout all the sections.

Next is the Hary Janos Suite by Hungarian composer Zoltan Kodaly (1882–1967). Kodaly extracted the orchestral suite from his comic opera of the same name, which he prefaced saying, "Hary is a peasant, a veteran soldier who day after day sits at the tavern spinning yarns about his heroic exploits. The stories released by his imagination are an inextricable mixture of realism and naivety, of comic humour and pathos." The music begins with an orchestral "sneeze," and from there it gets even more picturesque as it goes along. Dorati gives the piece a fine combination of vigor and excitement, and the Minneapolis players provide him all the zip and polish the work needs.

The final item on the program is the six-movement concert suite from the comic opera The Love of Three Oranges by Russian composer Sergei Prokofiev (1891–1953). If anything, this work is more outwardly exciting than the others, and again Dorati is up the challenge. What's more, the LSO play with all the zeal the music needs, so we get another triumph from the conductor and orchestra.

If I had to find any fault in the album (which I don't have to but will anyway, because, you know, it's what critics do), it's that the there are only three track points, one for each major item. I would have liked track points for each selection within each suite. Oh, well, a minor quibble.

The recordings from Minneapolis are as vivid as they can be. Highs seem a trifle hard and sharp at times, but, otherwise, the sound is as spectacular as a listener could want. I remember owning these recordings on vinyl many years ago, but I don't remember them sounding as good as they do here. The frequency and dynamic ranges are very wide, with strong impact all through the spectrum and as quick a transient response as you'll find. The midrange sounds beautifully balanced and transparent. The stereo spread is wide without being too close up. The London recording is similarly clear and dynamic, but it adds a touch more roundness and resonance from Watford Town Hall, making it even more lifelike. Really fine listening.