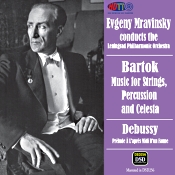 Bartok's Music for Strings, Percussion and Celesta is something of an odd duck, and it's one that many movie buffs may recognize from Stanley Kubrick's The Shining. Hungarian composer Bela Bartok (1881-1945) wrote it in 1936 to commemorate the tenth anniversary of the chamber orchestra Basler Kammerorchester, and it has since become one of the composers most well-known works. It is a somewhat strange, curious, even eerie piece of music, at least the way most conductors have approached it. I always think of it as atmospheric, with several of my favorite recordings of it coming at it from distinctly different directions: Leonard Bernstein (Sony) gave it an energetic reading; Herbert von Karajan (DG) provided a cushier, more glamorous setting; Pierre Boulez (Sony and DG) was more precise and exacting; Eugene Ormandy (EMI) was most eloquent; Sir Georg Solti (Decca) was a bit more brazen and robust; Sir Charles Mackerras (Linn) added a greater element of lyricism to the mix; and, for me, Fritz Reiner (RCA) delivered probably the best, most authoritative all-around interpretation.

Then there's the Russian conductor Evgeny Mravinsky (1903-1988) who gave us this 1965 recording, now remastered by HDTT (High Definition Tape Transfers). Mravinsky's version doesn't really fit any of the traditional categories, and listeners may either love it or hate it for its almost diabolical intensity. What's more, listeners may either love or hate the live sound, too, which the folks at HDTT have remastered quite well. But it's still live, with all its attendant charms and problems, depending on one's point of view.

Whatever, the first movement is like a slow fugue, its tempos changing up repeatedly. It starts out with extremely subdued strings and becomes louder and thicker as more instruments join the mix. After a quickened climax, the music eventually settles back into quietness. While Mravinsky doesn't necessarily take any of this quicker than other conductors, he does seem to intensify it more. There is little of the moody, atmospheric tone one usually hears, the aura replaced by more of an aggressive dynamism. Still, it's not entirely out of the mainstream, and if it weren't for the distracting audience noises throughout the quieter passages, it would be quite thrilling.

The second movement is fairly fast, distinguished by syncopated piano and percussion tones, a swirling dance subject, a lengthy pizzicato segment, and a vigorous conclusion. I found this section most effective under Mravinsky, the tension mounting appropriately, the contrasts nicely projected, the excitement well articulated.

The third, slow-movement Adagio is Bartók's "Night Music." It showcases a gliding effect for timpani, including a prominent part for xylophone. For me, Mravinsky's melodramatic take on it is more Halloween spooky than mysterious, expressionistic, or unearthly. That said, it remains a fascinating piece of writing, and the conductor does seem to be having fun voicing it, even if it appears to be more Mravinsky's voice than Bartok's.

The final movement begins with timpani and strummed pizzicato string chords and quickly moves into the lively flavor of a Hungarian folk dance. Here, I loved Mravinsky's vigorous attack on the music and its swirling rhythms. So, all's well that ends well.

The other selection on the album is Prélude à l'après-midi d'un faune ("Prelude to the Afternoon of a Faun"), a brief tone poem for orchestra premiered in 1894 by French composer Claude Debussy (1862-1918). Even if Debussy disliked the term "impressionist" applied to his work, there can hardly be a better word to describe the Prelude. My Random House Unabridged Dictionary defines musical impressionism as a "style of composition in which lush harmonies, subtle rhythms, and unusual tonal colors are used to evoke moods and impressions."

Debussy wrote of the Prelude that it "is a very free illustration of Mallarmé's beautiful poem. By no means does it claim to be a synthesis of it. Rather there is a succession of scenes through which pass the desires and dreams of the faun in the heat of the afternoon. Then, tired of pursuing the timorous flight of nymphs and naiads, he succumbs to intoxicating sleep, in which he can finally realize his dreams of possession in universal Nature."

So, how sensuous or sensual is Mravinsky's faun and his daydreams? Put it this way: Don't expect the lavish textures of a Karajan here. Do expect a precise, well-chiseled account of the score, maybe not as sinuous or sexy as it could be but well outlined in any case.

The Russian record label Melodiya recorded the music live at the Grand Hall of the Leningrad Philharmonic in March 1965. HDTT transferred it from a 15ips tape to DSD256 in 2016, and they make it available in a variety of formats: DSD256, DSD128, DSD64, DXD PCM, and PCM Flac digital downloads; DVD Audio; and compact disc.

Anyway, it is live, and one always knows it. If you don't mind the sound of the audience--coughs, shuffling, breathing, wheezing, gagging, and, as if you couldn't guess, plenty of applause--it shouldn't bother you. It did me. But if the audience noises don't annoy you, the sound is clean and detailed, if somewhat thin and hard. Dynamics are wide, impact moderately good, highs sparkling, and orchestral depth rewardingly realistic.