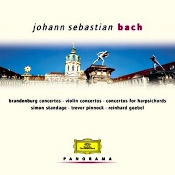 This two-disc set is a part of DG's series of important classical works culled from their back catalog. It features the six Brandenburg Concertos, the two Harpsichord Concertos, and the two Violin Concertos, all done on period instruments. The concept is fine, but I have to question DG's choice of representative recordings.

The centerpiece of the collection is, of course, the group of Brandenburgs, and here lies the main problem. Why did DG choose violinist and conductor Reinhard Goebel's 1987 performances, when they had Trevor Pinnock's superb realizations at hand? Goebel's interpretations are among those that put breakneck speed above everything else. They're mostly hell-bent-for-leather affairs, attempts to show off the band's virtuosity at the expense of presenting anything worth listening to. I frankly doubt that in Bach's time many orchestras would have played the pieces at such reckless tempos. For one thing, the eighteenth century was the Age of Reason, the Age of Enlightenment, and I doubt that listeners would have countenanced such hectic, almost foolhardy playing; for another, there probably weren't many house bands in Germany masterly enough to have accomplished the deed. So what's the point of "authenticity" if the interpretations probably bear little relation to reality?

Anyway, I recognize that a lot of people will find Goebel's Brandenburg readings invigorating and fun. However, I found them almost totally devoid of the charm, zest, delight, and refinement I hear in so many other period performances, like those from Trevor Pinnock and either the European Brandenburg Ensemble (Avie) or English Concert (DG Archiv), Jeanne Lamon and the Tafelmusik Baroque Orchestra (Tafelmusik or Sony), Jeannette Sorrell and Apollo's Fire (Avie), Jordi Savall and Les Concert des Nations (Astree), or the Leonhardt Ensemble (Sony), among others.

Fortunately, the accompanying Harpsichord and Violin Concertos are excellent, particularly the latter, featuring Simon Standage as violinist with Pinnock and his English Concert in accompiment. Pinnock and company play the works with appropriate zeal, yet they never sound anything but cultured and comfortable.

The early Eighties sound in the Violin Concertos is also quite fetching--cleaner, smoother, and more natural than in the other pieces on the discs. At a modest price, this DG set may seem inviting, but, overall, I'd stick with recommended individual accounts, even if the asking price is higher.