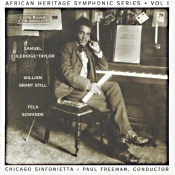 Look. I'm only going to say this one more time (or until I hear another disc from this source), so listen up. The folks at Cedille produce some of the best-sounding records in the industry. And as usual I'd like to commend engineer Bill Maylone for his contributions to the audiophile cause.

This 2003 release with the Chicago Sinfonietta under the directorship of its founder, Paul Freeman, is outstanding in every way. The sound is spectacularly wide, robust, dynamic, detailed, and wholly natural. Highs are sparkling, bass is deep and strong (with a drum rivaling the old Telarcs), depth perception is excellent, and imaging is superb. If the sonics have any weakness at all it's in the slightly soft midrange, yet even here it matches what I normally hear live in a concert hall.

But don't just buy the disc for its sound. The music is more than worthwhile, too. Volume One in Cedille's "African Heritage Symphonic Series," the album includes works by three prominent African American composers of the late nineteenth and early twentieth centuries. The program begins with two pieces by British-born Samuel Coleridge-Taylor (1875-1912), "Danse Negre" from his African Suite and Petite Suite de Concert. They are lightweight and highly accessible orchestral works from the man most famous for his big choral extravaganza, Hiawatha's Wedding Feast. Following them, we find an even more sprightly set of selections from Nigerian-born Fela Sowande (1905-1987), three movements from his African Suite.

Nevertheless, the Coleridge-Taylor and Sowande works are mere introduction to the disc's big number, William Grant Still's wonderful Symphony No. 1. Composer Still (1895-1978) came from a mixed background--African American, Native American, Anglo, and Hispanic--but never rejected his birth certificate identification as "Negro." His First Symphony from 1930, for those who've never heard it, will be a godsend for music lovers who enjoy Gershwin's Rhapsody in Blue, written half dozen years earlier. Still's symphony displays elements of blues, minstrel, ragtime, and Southern folk tunes, all fundamentally American idioms. The composer structured it in a traditional four-movement layout, with a big opening reminiscent of Rhapsody in Blue or Porgy and Bess, followed by a lovely Adagio, a brief but rousing Scherzo, and a surprisingly subdued but noble finale, all of which Maestro Freeman and ensemble play to perfection.

There is also a fine booklet essay on the three composers by music professor Dominque-Rene de Lerma included that does much to clarify the position of each man in the scheme of American musical life. All around, this disc was a sure crowd-pleaser to open Cedille's "African Heritage" series of recordings, and if you can find any of the series, I continue to highly recommend them.