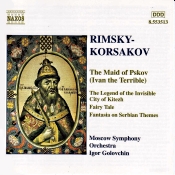 The music for The Maid of Pskov is incidental to the play on which Rimsky-Korsakov based his troubled opera (1872). The suite, frankly, left me a little bored. Perhaps I was expecting Scheherazade or the Russian Easter Festival Overture. In any event, most of the five movements are Entr'actes, meant to set various scenes rather than elaborate upon them. Maestro Igor Golovchin and the Moscow Symphony players do the best they can with it, I'm sure, the orchestra sounding finely polished.

The second work, The Legend of the Invisible City of Kitezh, from 1903, is much more evocative and has an especially elaborate and fanciful finale that is, in fact, reminiscent of the composer's earlier Scheherazade. Here, however, Golovchin seems a little understated when more color might have helped.

Probably the best piece on the disc, though, is Fairy Tale (1880), a brief, thirteen-minute tone poem for which Rimsky-Korsakov felt forced to suggest a few guidelines to listeners, suggestions like the sounds of the forest, the call of a mythical bird, a water nymph, and the famous witch, Baba Yaga. It holds up pretty well under Golovchin's still somewhat conservative approach.

The program concludes with another short work, the eight-minute Fantasia on Serbian Themes (1887), which again seems better focused and more impressionistic than the Maid music. My only concern in the performance was for conductor Igor Golovchin's rather measured, somewhat foursquare interpretations. I was hoping he would let loose with some real Russian zeal, at least in the closing moments of the piece, but it was not to be.

The sound the Naxos engineers provide for the Moscow Symphony is typically firm and solid for the company. It's a bit warm and soft and doesn't have much sparkle, but it does come across as rock steady, clean, and sturdy. Stereo spread appears quite wide, depth is moderate, dynamics are fine, and bass, particularly from a prominent bass drum, shows up firm and deep. No real complaints here.

With an ample seventy-two minutes of music, the Naxos label again provides one's money's worth in terms of material offered. And at the very least the little Fairy Tale is worth one's time.