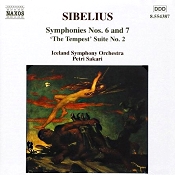 In order for any performance of a work by Finnish composer Jean Sibelius (1865-1957) to reach a level of excellence, it must display equal measures of boreal iciness and dreamy northern vistas. It helps, I suppose, that a Finnish conductor, Petri Sakari, and an Icelandic orchestra play the music on the present Naxos disc.

The cold is probably in their bones, and it's especially evident in the opening movement of the Sixth Symphony, the star of the set. There is an air of chill in the soft winds, leading to a gentle but coolly illuminated second movement, a fairly active scherzo, and a strong finale, wanting only in a touch of mystery.

The Seventh Symphony is somewhat different from the Sixth. It is quite brief at little over twenty minutes in length, and while demonstrating the traditional four-movement layout, we usually hear it as a single, uninterrupted unit. Still, the Seventh appears more massive and more substantial than the Sixth, a kind of synthesis, perhaps, of all that the composer had done before it. Sibelius seems to have condensed the essence of his bucolic wintry spirit into the work, and Maestro Sakari understands the importance of keeping the piece together and not letting it flake off into separate icy splinters. He maintains the work's cohesion and conveys its solemnity and triumph quite well.

Three of my comparison discs in these works were from Sir Colin Davis (RCA and Philips) and Sir John Barbirolli (EMI), the latter of whom has long been a favorite of mine. Unfortunately, making comparisons with well-established favorites may come out unfairly biased, so it's maybe no wonder I preferred them. Nevertheless, it is a measure of Sakari's skill that he more than holds his own with the other conductors, if never with quite the same characterful personality to his music-making.

Sound is another matter, and the Naxos engineers have served up a distinctive recording. It is a bit more rounded and more natural than the much older EMI recording, while not so transparent or robust as the RCA (or even the Philips). Still, this 2000 Naxos release has good range, good breadth, and good imaging, although I felt the cellos and first violins sounded a bit too close.

Overall, for its modest price, to get both the Sixth and Seventh Symphonies and a fascinating filler in Sibelius's incidental music to Shakespeare's The Tempest seems a pretty good deal.