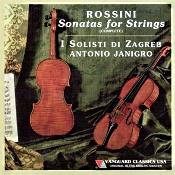 Here is one of my favorite old groups, I Solisti di Zagreb, led by their founder, conductor and cellist Antonio Janigro (1918-1989) performing the ever-delightful Sonatas for Strings by Italian composer Gioacchino Rossini (1792-1868). I could hardly recommend a set of performances more highly.

Rossini claimed much later in life that he wrote the six little sonatas for string orchestra when he was twelve years old and knew next to nothing about musical composition. Some people take him at his word; others think the old man was embroidering his youth or just plain kidding around. In any case, in the mid-twentieth century the original scores, dating from 1804, showed up in the Library of Congress, so I guess the composer wasn't kidding. Rossini rearranged the works for string quartet some time after their composition, but the chamber orchestra versions we get here are the ones we often hear these days.

The sonatas are charming in every way, displaying the vigor and zest of youth with lovely, tranquil interludes. Of the various recordings of the chamber-ensemble scores available, only Marriner with the Academy of St. Martin in the Fields on Decca and I Solisti Veneti on Erato equal Janigro and his group for bringing out the most felicitous moods of the music.

Vanguard's sound derives from 1956 and 1957 recording sessions, and it is really quite excellent, very clear, very nicely delineated, thanks to the Super Bit Map remastering the company did for the 2001 rerelease. What's more, there is very little background noise, just clean, transparent sound throughout.

But here's the kicker: The first four sonatas are in monaural. I swear, I didn't even realize it until I was about twenty minutes into the disc and began wondering why the sound field seemed a tad too narrow for stereo. You see, at first I was so bowled over by the clarity of the sonics, I didn't even notice the lack of stereo spread. Then, I thought, this is so clear and so narrow, I wonder if it isn't the quartet edition after all. Finally, I read a small notation on the back of the jewel box that notified me of the truth. The mono should not deter anyone. The fact is, the monaural tracks are just as transparent than the stereo ones and one hardly notices their narrow spread. The whole package really is a lovely listening experience.