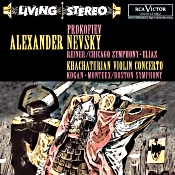 Russian composer Sergei Prokofiev (1891-1953) wrote his cantata Alexander Nevsky for the soundtrack of Russian filmmaker Sergei Eisenstein's 1938 motion picture of the same name. The film epic and the music commemorate the Russian repelling of a German invasion in the thirteenth century. In the tale, Prince Alexander Nevsky gathered an enormous army and met the enemy on the frozen ice of Lake Chud, where he dealt the Knights of the Teutonic Order a huge defeat. Today, people admire the film quite a lot, but I daresay even more folks know film's score better.

Eisenstein said of Prokofiev that he "...makes it possible for the screen to reveal not only the appearance and subjects of objects, but also, and particularly, their special inner structure...and forces the whole inflexible structure to blossom into the emotional fullness of orchestration." The movement titles say it all the better: "Russia Under the Mongolian Yoke," "Song About Alexander Nevsky," "The Crusaders in Pskov," "Arise, Ye Russian People," "The Battle on the Ice," "Field of the Dead," and "Alexander's Entry Into Pskov."

The 1959 recording of the score by Fritz Reiner and his Chicago Symphony does full justice to the music, bringing out the anxiety of anticipation, the brutality of fighting, the heartache of loss, and the exhilaration of victory. Equally important, RCA's "Living Stereo" sound is entirely up to the task of conveying the nuances and explosiveness of the music. The hitch is that Andre Previn recorded an equally good account for EMI with the London Symphony Orchestra in 1972, and Warner still have the EMI disc in their catalogue, offering it at a very low price.

Here are some of the differences between the Reiner and Previn recordings: Reiner's interpretation is a tad more heartfelt, and RCA's sound is wider and clearer. Previn's performance is a shade quicker and more energetic, and EMI's sound is a bit warmer. On the loudest choral climaxes, the EMI tends to break up slightly more than the RCA. Additionally, Previn's chorus sings in the original Russian, while Reiner's forces sing in English.

Choice between the two may rest with their couplings. The EMI/Previn disc gives us a superb realization of Rachmaninov's The Bells, based on the Edgar Allan Poe poem; the RCA disc offers Khachaturian's Violin Concerto with Leonid Kogan on violin and the Boston Symphony conducted by Pierre Monteux, recorded in 1958. Sonically, the Khachaturian is not as smooth or comfortable as the Prokofiev, and while Monteux, Kogan, and company play exceedingly well, personally I have never cared overmuch for the Violin Concerto. So it's an easy choice for me to pick the EMI disc. , For you, however, it may be quite different, and Reiner's performance is very persuasive.