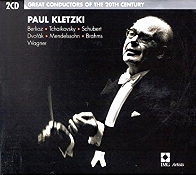 The bigger studios continue to mine their vaults for old material in new packaging, sometimes becoming redundant, sometimes finding gold. In the case of EMI's latest issue of remasterings, titled "Great Conductors of the 20th Century," they have provided a service in offering us much material never before available on CD.

Each of these sets includes recordings the conductors made throughout their lives, irrespective of whether they are in mono or stereo. Thus, each set usually contains a mixture of both. In the case of the Kletzki discs, three of the items are in mono and five are in stereo. Actually, none of the items are marked mono or stereo, but the recording dates are given and one's ears can do the rest. One live recording from 1965 turned out to be in monaural.

Of the Kletzki selections, I enjoyed the Tchaikovsky most of all, the Fifth Symphony with the Bavarian Radio Symphony Orchestra from 1967 and the Capriccio italien with the Philharmonia Orchestra from 1958. EMI released both of them in stereo and both are decently recorded, although perhaps a bit thin and scrawny by today's standards. In some parts, the Capriccio can be downright spectacular in vividness and impact, while slightly scratchy in others; the interpretations are heartfelt in the case of the Symphony and robust and thrusting in the case of the Capriccio.

The thing with Kletzki, as with all of the great conductors listed above, is that he wasn't afraid to be himself and impose at least some of his own will on the music, as opposed to so many of today's conductors who all tend to sound alike. Kletzki had a great ear for the rhythms of a piece, a musician's ear, and you can feel the lyrical and dance-like qualities he brings out in many of the works, as well as the driving vigor of others.

Among the further delights in the set are Berlioz's Bevenuto Cellini overture; Schubert's Rosamunde Entr'acte No. 5; Dvorak's Slavonic Dances in D major, C minor, and C major; Mendelssohn's Calm Sea and Prosperous Voyage overture; Brahms's Symphony No. 4; and Wagner's Traume No. 5. In addition to the orchestras mentioned, the groups employed include the Royal Philharmonic, the French Radio National Orchestra, the Israel Philharmonic, and the Czech Philharmonic.

So, there's quite a variety of music here, and all of it worthwhile.