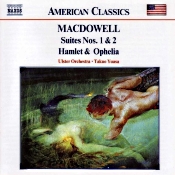 There was a time just before the turn of the twentieth century when composer and pianist Edward MacDowell (1860-1908) was maybe the most-popular American composer in the world. But times change, and MacDowell's brand of high Romanticism has long been on the decline. This 2001 Naxos disc presents three of the man's orchestral works, none of which match the grace or beauty of his piano concertos but which make for pleasant, easy listening.

The program begins with the Suite No. 1, premiered in 1895. It is a series of tone poems, the names of which will give some idea of their content: "In a Haunted Forest," "Summer Idyll," "In October," "The Shepherdess Song," and "Forest Spirits." Obviously, these are pastoral pursuits, mostly calm and serene set pieces. They are remarkably unremarkable, and there is no particular order discernible in their arrangement. Nevertheless, Maestro Takuo Yuasa and the Ulster Orchestra take them at a sweet, lyrical gait, the orchestra playing with grace and sensitivity, the whole thing coming off pleasantly enough.

Less disjointed is the Suite No. 2, written several years before the Suite No. 1 but not performed until a year later. MacDowell subtitled it "Indian," and it hangs together better symphonically, using material attributed to various Native American peoples. The headings here are "Legend," "Love Song," "In Wartime," "Dirge," and "Village Festival." Of the five movements, "Love Song" and "Dirge" stand out for me as the most original and most affecting.

The disc concludes with another tone poem, the thirteen-minute Hamlet and Ophelia, which doesn't try to tell their Shakespearean story so much as simply describe the two characters. For what it's worth, I preferred MacDowell's description of Ophelia to that of the indecisive Dane. Maybe MacDowell didn't understand the young prince any better than the young prince understood himself.

I would commend the Naxos sound for its depth of field, its excellent dynamics, and its natural, concert-hall ambiance. Yet for all that, it surprisingly never seems to come to life. I suspect it's a bit more backwardly miked than a lot of other recordings, and while it provides a pleasing resonance, it sounds a trifle dull and veiled. Perhaps it suits the music, though, which also sounds a little laid back.

Email ThisBlogThis!Share to TwitterShare to FacebookShare to Pinterest
Labels: MacDowell