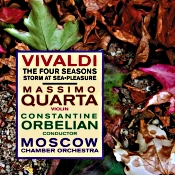 Now, you really didn't think you were going to get through another month without at least one more review of a Vivaldi Four Seasons, did you? I believe it must be the most-recorded piece of music in the classical arena. Fortunately, this particular entry from violinist Massimo Quarta, with Maestro Constantine Orbelian and the Moscow Chamber Orchestra in close attendance, makes a pretty good impression, and one should consider it at least a contender in an overcrowded field.

Still, it doesn't make much of an impression until you get a bit into it. Indeed, at first I thought it was going to be another also-ran, it seemed so ordinary. Part of this issue was the volume, I must admit. Delos recorded it at a slightly lower level than most other discs, so a little tweaking of the gain control was in order. Then things started to come into focus. By that time, too, I was well into the second movement of "Spring" and beginning to get a feel for Orbelian and Quarta's timing. They never take anything at breakneck speed, but they do approach the score at a rather quick gait, to say the least. What seemed routine soon became impressively thought out as I began to realize just how subtle and well-formed the performance was shaping up.

What I liked best was Massimo Quarta's violin playing, perhaps the most refined and most virtuosic I have heard in these works in ages. His violin technique seems effortless, yet he manages maneuvers that might make even the best practitioners of the art shudder. And he accomplishes this with such smoothness and grace, you might not notice it at first listen. As far as the interpretation itself is concerned, it is basically an up-tempo but still middle-of-the-road approach.

The only thing I didn't much like about Quarta's reading, though, is what he does with the Largo of "Winter," sucking much of the charm out of it with his brisk playing. I know the poem describes somebody running in out of the cold, but this a bit too fast. Nevertheless, it was only a minor discomfort in an otherwise brilliant display of showmanship and color.

The two fill-ups are the next two concertos in the same Il Cimento dell' Armonia e dell' Inventione series, Nos. 5 and 6, "The Storm at Sea" and "The Pleasure" (or "The Rapture," depending on who's doing the translation). The players do an equally good job bringing out all their charms.

The sound, as I said, is somewhat low in output, but turned up a mite it reveals excellent inner detail and a remarkable natural fluidity. Maybe the strings come off too brightly at times, and maybe there could be a touch more bass resonance or warmth. Otherwise, it's a terrific showpiece, done up in lightly reflective Dolby Surround, which in my main listening room (for music, as opposed to my surround-sound room for movie watching) sounded fine even without the extra speakers. It's a good all-around effort.