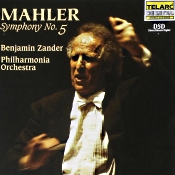 No guts, no glory. Benjamin Zander and the Philharmonia Orchestra attack this most passionate of Mahler's big orchestral works with all the extremes of emotion it deserves. Indeed, Zander's performance may come as close to Mahler's intentions as any recording on the market.

Austrian composer and conductor Gustav Mahler (1860-1911) wrote his Symphony No. 5 in 1901-02, and it is among his most varied works, beginning in sorrow and solemnity and culminating in joy and happiness. The turning points are the third movement Scherzo, sounding much like Mahler's usual parodies of a traditional Viennese waltz, and the famous Adagietto, really a love letter to the composer's wife, Alma. These lead into the joyous Finale.

Zander takes each movement very slightly quicker than many of his rivals, but never does he lose the lilt or flavor of the more lustrous passages. Interestingly, too, Zander tells us in a booklet note that after he had recorded the piece, he compared his timings for each movement to those of Mahler himself as reported by a listener at a rehearsal of the work, and Zander's timings were no more than a minute different from Mahler's for the entire symphony. Of course, that doesn't prove anything, really, because we don't know for certain what Mahler's tempos were in an actual performance, nor do we know what Mahler's phrasing was like. Nor can we be sure that any composer is the ultimate authority on conducting his own works. Whatever, it makes a fascinating point.

None of this is to suggest that Zander's reading is any better than rival versions, but it surely equals some of the best I've heard. However, I still have a preference for Sir John Barbirolli's rendition (EMI, now Warner Classics) in which Sir John wears his heart more openly on his sleeve, luxuriating ever the more slowly in each movement, especially the Adagietto, which, nonetheless, manages to sound a note of love and beauty rather than being entirely funereal. Getting back to Zander, let's give him an A for effort here and assume his performance is as close to Mahler's designs as any around, a small degree of sentimentality notwithstanding.

In addition to the symphony, the folks at Telarc also include for the cost of the one CD an extra disc, seventy-eight minutes long, of Zander discussing the symphony. He takes us movement by movement through the work, commenting and illustrating points by using not only his own recording but historical recordings as well. It's a welcome bonus disc, even if Zander emerges from it a bit too much the pontifical lecturer in his narration.

The disc's sound is big and bold in the Telarc tradition, a recording exuberant enough to match the interpretation. The dynamic range is wide, and the frequency response reaches the limits of both ends of the sonic spectrum. Yet here's the snag: It doesn't appear to have a lot of presence, and, in fact, when comparing it to Barbirolli's 1969 account, it has less depth and less inner detail. What's more, the Barbirolli disc comes in at mid price, remaining a glorious bargain.

Still and all, this Zander/Telarc disc is one to consider, and for people looking for the least degree of idiosyncrasy in their music, it may top the charts.