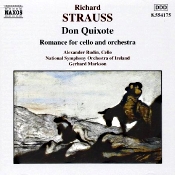 I'm sure I don't have to remind any fan of German composer Richard Strauss (1864-1949) that the tone poem Don Quixote is about Miguel de Cervantes Saavedra's famous old-timer who fancies himself a knight of high ideals, with a cello performing the knight's part and a viola his sidekick, Sancho Panza. Nor that the work contains ten variations, mostly representing Quixote's adventures, plus an introduction and an epilogue finale. Strauss composed Don Quixote in 1896, just a couple of years after Also Sprach Zarathustra, and both tone poems have enjoyed enormous popularity ever since.

Under the guidance of Maestro Gerhard Markson, with Alexander Rudin the cellist, the piece comes up pretty well, if perhaps with a bit of its color glazed over in a kind of homogenized way compared to other famous recordings. The two discs I had on hand for comparison were Mstislav Rostropovich, cello, with Herbert von Karajan and the Berlin Philharmonic (EMI) and Paul Tortelier, cello, with Rudolf Kempe and the Staatskapelle Dresden (EMI). Both competing performances appear a little more animated to me, more heartfelt, and, ultimately, more entertaining.

This is not to suggest, however, that we should not welcome another interpretation like Rudin and Markson's, especially when the end result is nonetheless valid. The Rudin/Markson combo provides us with a suitably comfortable old Don, one who is at his feeble leisure, one who appears weaker and slower, maybe more apt to fall asleep under one of his windmills, than some of the rival versions offer.

I found the Naxos sound, issued in 2000, also commendable for its smooth reliability. It is fairly natural, and I thought it even well imaged until the bass drum reached out and bit me on the toe. Still, most of it makes for comfortable listening.

The disc's fill-up is the short Romance for cello and orchestra, which Strauss wrote about fourteen years earlier than Quixote. Although it, too, sounds adequately performed, one must remember that for about the same mid price, one can buy the aforementioned Rostropovich rendering on a remastered EMI disc, which not only has more sonic detail but the advantage of a master cellist, the sonority and range of one of the world's great orchestras, and Schumann's Cello Concerto as a companion. Now that I think about it further, that is definitely quite a bargain, as is the Tortelier/Kempe album with Don Juan and The Dance of the Seven Veils thrown in for good measure. But you probably already knew that.