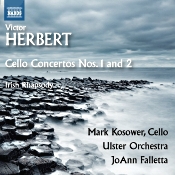 If you're like me (heaven forbid), you probably think of Victor Herbert as a composer of light music and operettas (Naughty Marietta, Babes in Toyland, The Red Mill, and many more). But in addition to forty-three operettas, he also produced two operas, a cantata, incidental music to ten plays, thirty-one compositions for orchestra, nine band compositions, nine cello compositions, five violin compositions with piano or orchestra, twenty-two piano compositions, and numerous songs, choral compositions, and orchestrations of works by other composers. What we have on the present album are his two cello concertos and a shorter orchestral work, the Irish Rhapsody, authoritatively performed by cellist Mark Kosower, conductor JoAnn Falletta, and the Ulster Orchestra.

Not that the Irish-born, German-raised American composer, conductor, and cellist Victor Herbert (1859-1924) abandoned elements of light music in his Cello Concerto No. 1 in D major, Op. 8 (1884), which leads off the program. Indeed, the piece is still pretty light, with an abundance of delightful melodies. The First Concerto seems much in the Romantic tradition, with an assortment of lush melodies and a sweetly gentle flow to the score. The dreamy slow movement seems right off the light-opera stage. Although there isn't a lot of substance to the concerto, its lyrical feeling is hard not to like. Mr. Kosower plays the solo part with grace and sensitivity, and Ms. Falletta and the orchestra support him admirably.

The Cello Concerto No. 2 in E minor, Op. 30, written a decade later, is a different matter. It is more substantial in terms of serious material than his earlier cello concerto and displays more maturity in its writing. Here, the composer appears more interested in providing a tightly knit, coordinated piece of thoughtful music rather than just a bit of light entertainment. The work apparently inspired Herbert's boss, Antonin Dvorak, to write his own cello concerto, and we all know where that went. So, praise be to Herbert. Again, Kosower performs the piece with appropriate eloquence and enthusiasm. The central slow movement provides a tranquil if somewhat solemn interlude, with Kosower and Falletta doing justice to the work's varying moods and tone.

The program concludes with the Irish Rhapsody for Grand Orchestra (1892), which may be the most famous of Herbert's non-operetta compositions. It comprises a string of popular Irish melodies into a piece that is, frankly, rather sentimental but altogether charming. Ms. Falletta and the Ulster players seem to relish the many familiar tunes in the piece, performing with an obvious joy and enjoyment. The music may be little more than a medley of familiar tunes, but they are well-loved tunes and very well played.

Producer Tim Handley and engineer Phil Rowlands recorded the album at Ulster Hall, Belfast, Northern Ireland in April 2015. The sound displays plenty of hall resonance, enough to give it a feeling of reality. This, along with a moderately distanced miking, a wide frequency range, and a good sense of orchestral depth, provide a lifelike setting for the music. The cello sounds particularly well integrated with the rest of the ensemble, so nothing stands out too much as spotlighted or compartmentalized. Ultimate transparency takes a second place behind the warmth of the sound, so don't expect too crisp a response, just a fairly natural one.

Email ThisBlogThis!Share to TwitterShare to FacebookShare to Pinterest
Labels: Herbert