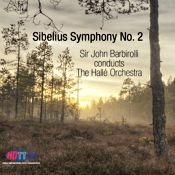 Two of my favorite recordings of Sibelius's Second Symphony come from Sir John Barbirolli: His 1962 version with the Royal Philharmonic at Walthhamstow Town Hall, London (reissued on a Chesky Gold edition that is especially good), and this 1966 rendering with the Halle Orchestra at Kingsway Hall, London. Of the two, I really have a hard time deciding which I prefer; I know I enjoy the stately gravitas of the 1966 interpretation, and it's particularly nice to hear it remastered by HDTT (High Definition Tape Transfers).

The Finnish composer Jean Sibelius (1865-1957) wrote his Symphony No. 2 in D, Op. 43 in 1902, and over the past hundred-plus years it has become one of his most-popular works. The listening public dubbed it his "Symphony of Independence," even though musical scholars are unsure whether Sibelius meant to attribute any symbolic significance to the piece. Whatever the case, the work ends in a splendidly victorious finale that certainly draws out a feeling of nationalistic pride and self-reliance.

The music begins in a generally sunny mood, building to a powerful a climax, with a flock of heroic fanfares thrown in for good measure. One of the first things to notice is Barbirolli's generally relaxed tempo at the beginning. It's a promise of good things to come. This is no rush job, no excuse to show the listener how much excitement the conductor can drum up. Nor is it a lax or lackadaisical performance. In fact, the more you hear it, the more "right" it sounds. Even those heroic fanfares sound flawlessly integrated into the first movement's structure rather than flamboyant add-ons.

Sibelius marked the second movement Andante (moderately slow) and ma rubato (with a flexible tempo) to allow a conductor some measure of personal expression. It begins with a distant drum roll, followed by a pizzicato section for cellos and basses. Barbirolli handles it wonderfully, never allowing it to descend into gloom or sentimentality at the extremes. Again, Barbirolli permits the music to unfold at its own pace, without ever forcing the issue. It's quite beautiful, actually, with a sweetly Mediterranean flavor throughout and the Halle Orchestra providing warmly polished playing.

The third-movement scherzo displays a fair amount of orchestral pyrotechnics, interrupted from time to time by a slower, more melancholy theme before seamlessly making a transition into the Finale. Sibelius labeled it Vivacissimo, obviously a tempo taken in a lively and vivacious manner, which Barbirolli observes without undue attention to himself.

Then, the Finale bursts forth radiantly, in an explosive, thrilling, patriotic manner. In all, Barbirolli conducts a luminous interpretation of the symphony, full of vigor and sparkle and life, yet above all communicating an infectious air of joy.

Producer Ronald Kinloch Anderson and engineer Neville Boyling recorded the music for EMI at Kingsway Hall, London, in July 1966; and HDTT transferred it to CD in 2016 from a 15-ips 2-track tape in pure DSD with no PCM used.

The remastered sound appears perfectly balanced, with a fine sense of air, depth, transparency, and ambient bloom around the instruments. Strings sound particularly realistic, with a good shimmer and shine. Note, however, that I have always had a slight misgiving about the EMI sonics (now Warners) on their Halle discs; the orchestra seems a little too thin and the upper registers a bit too forward and almost edgy. But in this HDTT remaster, almost everything sounds right. (In a direct comparison of the EMI-Japan and HDTT products, the EMI disc sounded brighter, clearer, and rougher at the high end, the HDTT disc smoother, fuller, and as a result more lifelike.) A small degree of softness in the upper treble of the HDTT product is about the only other perceptible difference. Whatever, the HDTT remastering is one of the more natural recordings I've heard in a while, and it fully complements Barbirolli's affectionate reading.