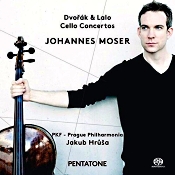 The relatively young German-Canadian cellist Johannes Moser (b. 1979) had by the time of this album already recorded the cello concertos of Saint-Saens, Britten, Shostakovich, Martinu, Honegger, and Hindemith. Now, let's face it: for a cellist, the concerto repertoire is not all that large (in fact, for many years, composers sort of shunned the cello as a solo concerto instrument, with J.S. Bach, Mozart, Beethoven, Schubert, and the like pretty much ignoring it except in chamber works). So it's no wonder Moser turned next to what is probably the most-famous cello of them all, the Dvorak. With fine accompaniment from Maestro Jukub Hrusa and the PKF-Prague Philharmonia, an apt coupling of the Lalo cello concerto, and fine Pentatone SACD sonics, this package makes a welcome appearance.

Czech composer Antonin Dvorak (1841-1904) wrote his Cello Concerto in B minor, Op. 104 rather late in his career (1895), the work since becoming one of the most-popular cello concertos of all time. So popular that you'll find some excellent recordings of it by any number of artists, like those of Mstislav Rostropovich (DG), Yo-Yo Ma (Sony), Pierre Fournier (DG), Jacqueline du Pre (EMI), Leonard Rose (Sony), Gregor Piatigorsky (RCA), Lynn Harrell (RCA), Pablo Casals (EMI and Dutton Labs), Paul Tortelier (EMI), Rafael Wallfisch (Chandos), Truls Mork (EMI), Maurice Gendron (Philips or HDTT), and my own favorite, Janos Starker (Mercury), among others.

Here, we add Moser. As the Cello Concerto contains an abundance of attractive melodies, it gives Moser and company ample opportunity for displaying nuance, sensitivity, and a little sentimentality. For instance, Dvorak wrote the slow, second-movement Adagio while his much-beloved sister-in-law lay dying, and he used one of her favorite pieces of music as a central theme. In it, he creates a lovely, explosively gentle, faintly melancholic mood, which Moser exploits with appropriate passion and tenderness.

Whatever, Moser's tempos seem well within the ballpark for most other interpretations I've heard, yet his playing seems more relaxed than many others. For some listeners, this will be a good sign. For other listeners, he may appear somewhat lax, maybe too slack. Certainly, it would play up the differences in emphases and contrasts in the work if Moser had put more energy into the more vigorous sections. This isn't much of a criticism, though, as the overall impression of the work under Moser is one of big, warm, sweet, solitary contemplation, even in the more-explosive bits.

In the Finale, we get more fire and heroics from both the soloist and the orchestra than we heard previously from them. Nevertheless, even here Moser and his team seem a little reticent to let completely loose. In other words, the performance seems maybe a touch too sedate for its own good.

So, the final question is whether this recording from Moser and company is any better than the several recordings I mentioned above. The answer is, probably not. There is an ardent, honeyed glow about Moser's rendition, to be sure, that will no doubt appeal to many listeners. However, for me there wasn't quite enough there to justify the price of yet another competitor in an already crowded field of contenders.

The accompanying Cello Concerto in D minor by French composer Edouard Lalo (1823-1892) may not be as well-known as the Dvorak, but it is close, and the French work is almost as ambitious and communicative. With the Lalo, Moser's easygoing style works better than it did in the Dvorak. It's a charming and engaging interpretation, even if the orchestra's contributions appeared to me a mite too staid to do justice to Moser's amiable, stress-free manner.

Producer Job Maarse and engineers Erdo Groot and Roger de Schot recorded the music for Polyhymnia International V.V. at the Forum Karlin, Prague, Czech Republic in January 2015. They made it for playback via hybrid SACD: multichannel or two-channel from the SACD layer and two-channel only from the regular CD layer. I listened in two-channel SACD.

The sound provides a glowing, natural, very slightly soft ambience that makes everything appear fairly lifelike. You won't perhaps get an ultimate transparency here, just realistic reproduction. There is a reasonably good stereo spread, with a fine sense of depth to the orchestra. There is also a very slight bit of background noise, barely audible but present. The dynamic range seems more than adequate, although I didn't hear as much impact as I expected. The cello is slightly bigger than life, maybe recorded a little too close. Still, it, too, sounds most truthful on its own. It's a handsome production, sounding much like the Philips recordings of old, which I count a good thing.