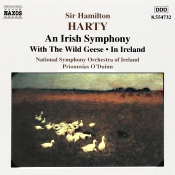 How could this 2001 album of Irish orchestral music miss when it features three of the most-popular works of one of Ireland's most-celebrated composers, Sir Hamilton Harty (1879-1941), done up by one of Ireland's most-accomplished orchestras, the National Symphony of Ireland, and lead by an Irish conductor with the name of Proinnsias O'Duinn? Add in good Naxos sound and a reasonable price and you have the well-known definition of a bargain on your hands.

All the works on the disc are pretty much tone poems, evocations of Irish life in both war and play. The leadoff selection is the eighteen-minute piece "With the Wild Geese" (1910), a varied and moody work depicting an Irish regiment of soldiers fighting with the French in 1745. The second, shorter, piece, "In Ireland" (1918, orchestrated in 1935), describes city life in Dublin. Finally, An Irish Symphony (1904) arrives in four movements, with the suggestive names "On the Shores of Lough Neagh," "The Fair-Day," "In the Antrim Hills," and "The Twelfth Night." It's the quick, second-movement scherzo that is probably most familiar, quoting as it does several popular Irish melodies.

In fact, all the music is reminiscent of a hundred Irish folk tunes you've probably heard over the years, none of them particularly memorable but all of them contributing to the music's overall entertainment value. This is not classical music of the highest or most-noble bent, just pleasant, sometimes nostalgic, often relaxing, occasionally cheering, and ultimately rewarding music.

O'Duinn directs the music at a comfortable pace, never forcing its nostalgic or sentimental characteristics on the listener and nicely clarifying the big tunes. The National Symphony Orchestra of Ireland plays with an equally easy grace, although they don't sound quite as lush or luxuriant as the best London orchestras. Still, everyone is more than up to the job.

The Naxos sound is up to the task, too, with good dynamics, a reasonably wide frequency response except perhaps in the very lowest registers, and a fine degree of sparkle. This means it is sound that fits the music, and it's hard not to like it.

Email ThisBlogThis!Share to TwitterShare to FacebookShare to Pinterest
Labels: Harty