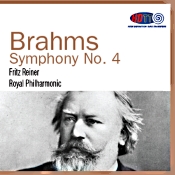 The Hungarian-born conductor Fritz Reiner (1888-1963) enjoyed a prominent career, especially working in Europe with Richard Strauss, and then in America, to which country he emigrated in 1922. For most of us, though, he probably did his most notable work with the Chicago Symphony and RCA in the early days of stereo from 1954-1963. However, during those last years, he didn't record exclusively with Chicago, as this disc demonstrates. He recorded the Brahms Fourth with the Royal Philharmonic at the very end of his life, making it as a part of a Reader's Digest series of LP's and tapes. In fact, he had apparently committed to yet another recording with them, but ill health prevented it, and he died shortly thereafter. In any case, what we have here is a remastering from HDTT (High Definition Tape Transfers) of that early Sixties performance, and at its price and availability, it is welcome, indeed.

German composer Johannes Brahms (1833-1897) premiered his Symphony No. 4 in E minor, Op. 98 in 1885, the symphony the last of four he wrote and possibly his most wholly satisfying. The opening movement begins gracefully and builds in dramatic tension using some of the composer's most memorable tunes. It is only here that Reiner displays a degree of idiosyncrasy, and I hope it doesn't put off too many listeners. The fact is, Reiner is quicker through the first movement than almost any conductor in my experience. Now, it was not unusual for Reiner to create a strong forward momentum in his recordings. His Beethoven Fifth with Chicago moves at practically a breakneck speed, yet it is one of the most thrilling experiences on record. Here, however, the accelerated gait seems to rush what should have been a more-peaceful tone. In any case, it prepares us appropriately for the Andante that follows.

The second-movement Andante moderato is placid and serene, wearing its heart on its sleeve, accompanied by a plush orchestral arrangement. The Royal Philharmonic sounds its finest in this movement, with Reiner never pushing it or the score. In fact, Reiner, who most always stuck to the letter of the composer's intentions, articulates the music in soft, glowing terms, his timing a bit slower than most other conductors in order to more fully explore the tranquil mood.

The third movement Scherzo is cheerful, festive, and exuberant, providing the symphony a sudden note of excitement and happiness. Reiner conveys this exuberance with alacrity, and it's a high point of the interpretation.

The Finale is powerful and relatively serious, the composer noting that the conductor should play it with energy and passion ("energico e passionato"). This is exactly what Maestro Reiner does, although it is no headlong rush; it is a sensible and reasoned account, with the Royal Philharmonic responding in kind. Reiner's recording must be considered among the most worthy in the catalogue, and one should not count any minor misgivings against it. For most listeners, Reiner's way with the music will be a heaven-sent answer to other more-bland renderings of the work.

RCA producer Charles Gerhardt and Decca engineer Kenneth Wilkinson recorded the symphony in the early 1960's for the Reader's Digest series, with RCA rereleasing it in 1966. HDTT transferred the recording in 2016 from a 15ips 2-track tape studio duplication using Dolby NR.

Because this was a different orchestra and a different venue for Reiner from his usual Chicago Symphony Orchestra, the sound is a little different, too. It's not quite as wide in its stereo spread and not quite as transparent as the RCA Living Stereo presentations. Yet it's just as lifelke, perhaps even more so for being miked a tad more distantly. There's a wonderful sense of space and depth to the ensemble, with a mild ambient bloom to make everything appear quite natural. More to the point, HDTT's transfer of the recording to CD appears letter-perfect. Highs are a tad forward, yet they don't seem out of sync with the rest of the reproduction, which is realistically well balanced. Clarity, which may not be quite that of Chicago, is, nevertheless, quite good. Overall, it's another fine issue from a company that reminds us just how good early stereo recordings were.