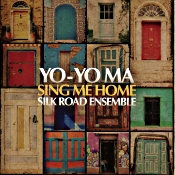 Silkroad, as you probably know by now, is the nonprofit organization cellist Yo-Yo Ma founded back in 1998 to encourage a multicultural artistic exchange of study and ideas. World Music Central and The Irish Independent described Silkroad as an "arts and educational organization that connects musicians, composers, artists and audiences around the world" and "an initiative to promote multicultural artistic collaboration." Yo-Yo Ma took his inspiration "from the historical Silk Road trading routes and using the Silk Road as a modern metaphor for sharing and learning across cultures, art forms and disciplines."

Sing Me Home is the seventh album The Silk Road Ensemble have released since 2001, and if you like the kind of ethnic music they perform, you'll no doubt like this latest issue. Its producers describe it as "the companion album to the Morgan Neville documentary The Music of Strangers: Yo-Yo Ma and The Silk Road Ensemble, and they call it "the artists' most-personal album to date." Ma says the album is "a tribute to how culture helps us all to meet, connect, and create something new."

The program presents a varied assortment of world music, some of it new, most of it traditional, representing a wide variety of cultures. Here's the playlist:

Because the performers are tops in their field, the music sounds immaculate. More important, they play with an infectious enthusiasm, which combined with the precision of their talents creates an atmosphere of joy throughout the proceedings.

The opening track, "Green: Vincent's Tune," arranged by Wu Man, becomes a little raucous but it's undeniably infectious, too. The following item, "O'Neill's Cavalry March," couldn't be more different, an Irish number, and just as infectious.

And so it goes.

As I say, we get a varied selection of tunes, mostly characterized by string and percussion instruments, with occasional solo and choral vocals. The ensemble's Colin Jacobsen came across "Little Birdie" while listening to a collection by Pete Seeger and loved it. "Ichichila" is another highlight of the program, a song of the Tuareg people; it's delightful.

The flawless precision of the Silk Road Ensemble ensures that every item on hand sounds better than the last. You think, my, wasn't that fun, when along comes another just as good or better. Interestingly, the songs slow down considerably as the program goes on, reaching a dirgelike state by "St. James Infirmary," and end with a sweetly flowing rendition of Hoagy Carmichael's "Heart and Soul" with Lisa Fischer and Gregory Porter. The album offers one newly discovered charm after another.

As with most popular albums, the engineers give us a fairly close perspective, yet it's one that displays a good deal of separation among the instruments and a reasonable amount of depth to the ensemble. Wide dynamics, strong bass, and a warm, smooth frequency balance help to produce a good, natural sound. There is nothing hard, bright, or edgy here, so expect a relaxed listening experience.