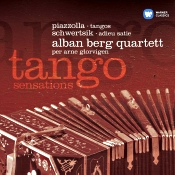 First, one has to understand, as the booklet points out, that there is the "old tango" and there is the "tango nuevo," the "new tango." This is important because it is the old tango music popularized in early twentieth-century Argentina that most people are probably most familiar with. The newer form is less like the dance music heard so commonly in old movies and more like modern concert music, made for performance in refined symphony halls rather than smoky bars and bordellos. Naturally, the Alban Berg Quartett, as refined and modern as they come, opt for the new tango for most of the present recording.

Leading the move in new tango was Argentine tango composer, arranger, and bandoneon player Astor Piazzolla (1921-1992), whom some in his country vilified for daring to modify their traditional music. Under Piazzolla, the tango became more stylized, more rhythmically variable, and certainly less danceable. Frankly, one can understand people's feelings; much of Piazzolla's work is hardly recognizable as tango in the traditional sense.

Anyway, he's represented on the album by two longer works, the four-movement Tango Sensations, representing "Asleep," "Anxiety," "Awake," and "Fear," about twenty minutes long, and the sweetly melancholic Tristezas para un AA, about thirteen minutes long. Also in the modern mode is Kurt Schwertsik's Adieu Satie, a five-movement, new-tango reworking of melodies evoked by the spirit of French composer and pianist Erik Satie. Representing the old tango we find Eduardo Arolas, Juan Carlos Cobian, and Julio de Caro, each of whom gets a short work played on solo bandoneon.

The Alban Berg Quartet is augmented by Per Arne Glorvigen on bandoneon (an eighteenth-century German variation of the accordion that has become inextricably identified with the Argentine tango) and Alois Posch on double bass. Of course, the Quartet play these things with authority, elegance, and polish, but personally I still prefer the earthier qualities of the old tangos to the ultra sophistication of the more newfangled Piazzolla-type concoctions. Understanding what you're listening for, this is nevertheless a great disc of its kind.

EMI recorded the music in the early 2000's, and Warner Classics more recently rereleased it. The sonics communicate nicely through their clarity and tone, and the disc sounds especially realistic in the layout of the instruments.