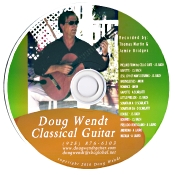 Classical guitarist, jazz guitarist, pop guitarist, bluegrass guitarist, folk guitarist, blues guitarist, teacher, and experienced chef to boot, Doug Wendt is pretty much an all-around performer. According to his bio, he earned a B.A. in Guitar Performance from California State University of the East Bay (CSUEB). Also an experienced chef, including over ten years as sous-chef at a top-class Italian Restaurant, Doug decided to make his part-time music activities into a full-time career about fifteen years ago.

Doug's wife, Deborah Kuhl, (singer, songwriter, and pianist), who regularly performs a repertoire of French music, borrows Doug on occasion and featured both Doug and Gordon Rowland on her CD "Carte Postale."

On the present disc, Wendt plays classical guitar, the program running high to his favorite composer, J.S. Bach. The selections include Bach's "Prelude" from the Cello Suite No. 1, "Gavotte," "Jesu, Joy of Man's Desiring," "Little Prelude," "Double," and "Bouree." In addition, we get Alessandro Scarlatti's "Gavotte"; Domenico Scarlatti's "Sonata in A" and "Sonata in Em"; Antonio Lauro's "Preludio Venesolano," "Andreina," and "Natalia"; and two anonymous tunes, "Romance" and "Greensleeves."

Doug brings to all of this material the same warmth and affection I've heard from him live: low-key presentations that never call attention to the performer but always showcase the music. In other words, you'll find more flamboyant guitarists around, ones who revel in the dexterity of their finger work and virtuosity of their playing; but one can hardly find anyone more committed to bringing to life the spirit of the composers and their music than Doug Wendt.

Now, don't get me wrong. I'm not suggesting Wendt is another Angel or Pepe Romero, John Williams, Andres Segovia, Julian Bream, David Russell, Narciso Yepes, or the like. But he is good, and he projects an agreeable sweetness in his music. So, onward....

Among my favorites on the disc is Wendt's playing of Domenico Scarlatti's "Sonata in A," an item I've heard any number of times performed on solo harpsichord, piano, and guitar. Some musicians seem intent on attacking it full throttle, while others appear content with providing cozy, almost sentimental interpretations. Doug does neither; he comes at the score gently but firmly, caressing each note without unduly emphasizing each one. The result is a performance that sounds neither sensational nor lackluster but just right.

Wendt chooses fairly modest tempos throughout the program, so, again, he's not trying to impress the listener with wild flights of fancy or gushy, maudlin outbursts. The familiar "Jesu, Joy of Man's Desiring" and "Greensleeves," for example, come across charmingly and effortlessly, with the guitar producing a warm, rich sound that well complements the compositions. As my wife remarked, the chords are so simple, but they're soft and beautiful. Indeed, they are. It's a lovely album.

Thomas Martin and Jamie Bridges recorded the music in 2010. The sound appears fairly close but very well detailed and realistic. There's a modest amount of resonance involved, too, which helps to gives the guitar a lifelike sense of presence. Fortunately, the close miking is not so severe as to spread the instrument across the entire soundstage but keeps the guitar nicely focused between the speakers.

To learn more about Doug Wendt and his work, visit http://www.dougwendtguitar.com/.