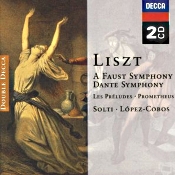 This mid-priced Decca Double rereleased in 2001 could well be a bonanza for Liszt lovers who have been unaware of it before now. The set combines two of the composer's largest and most ambitious orchestral works with a pair of his most-popular tone poems and offers them in thrilling performances, especially the ones from Sir Georg Solti.

Some music historians credit Liszt with inventing the tone poem (which I doubt because Vivaldi and even Beethoven were doing them long before him), but no matter what Liszt himself called his music, it almost always came out a tone poem. The two "symphonies" represented here, Faust and Dante, are, in fact, each a series of tone poems. The Faust, conducted by Solti with the Chicago Symphony Orchestra and Chorus and Siegfried Jerulsalem, tenor, is big and bold. It is not so subtly impressionistic as Beecham's account (EMI), but it catches the multilayered drama of the protagonist, Dr. Faustus, who sells his soul to the devil; the passion and purity of his love interest, Gretchen; and the turbulence of the devil, Mephistopheles. The digital sound from 1986 is among the best on the disc for the work, full and robust, not entirely well imaged in terms of depth but convincingly dynamic.

The Dante Symphony is more problematic. In it, Liszt tries to create a musical picture of Dante's Divine Comedy, representing the "Inferno" and "Purgatory" sections but without "Paradise." Liszt was talked out of trying to do "Paradise" by no less an authority than Richard Wagner. Too bad. It might have been fun to hear what the master tone painter could have done with it. Instead, Liszt ends "Purgatorio" with just a hint of things to come, a brief vision of heaven. Then, the Decca engineers provide us a loud, boisterous alternative ending that folks persuaded Liszt to add later on. If it had been left to me, I would not have included it. In any case, Jesus Lopez-Cobos leads a fairly routine performance of the work, which is not helped by the sometimes fierce 1981 early digital sound.

Then, Decca filled out the two-disc set with two more tone poems, the popular Les Preludes and the Prometheus. I suspect Les Preludes is Liszt's best-known orchestral work, thanks largely to the old "Flash Gordon" serials of the Thirties and Forties, which borrowed extensively from the score. Solti's interpretation of it is among the finest on the market in terms of sheer excitement, so it's good to have that alone. The sound of these two final tone poems comes in analogue from 1977 and holds up well, although here the imaging tends to be compartmentalized to a greater degree than the others. Whatever, I thoroughly enjoyed most of the set.