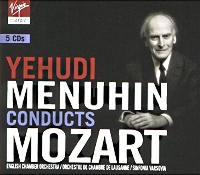 I've never been big on recommending sets of anything. More often, one can find individual performances by different conductors that bring more consistent pleasure. Yet occasionally one finds a boxed set of something that has so many outstanding virtues it's hard not to commend. Such is the case with Yehudi Menuhin's 1989-90 recordings of late Mozart symphonies, plus various odds and ends, boxed up on five discs from Virgin Classics. Menuhin (1916-1999) had turned to conducting in his later years, the stress of playing the violin finally becoming too demanding for him. He seemed to have been about as successful at the new endeavor as he was at the old.

All of the performances are characterized by Menuhin's obvious love and affection for the music. Speeds are zesty but never breathless or out of control. Phrasing is imaginative but never idiosyncratic to the point of distraction. Dynamic contrasts are wide but flexible and never overpowering. These are enthusiastic, quick-footed interpretations that, nevertheless, almost always sound right. What's more, the three small orchestras involved come across light enough to produce as fleet and intimate a sound as the readings demand.

The most obvious comparison I had on hand for a large set of Mozart symphonies by a smallish ensemble was Daniel Barenboim's late Sixties-early Seventies collection of recordings with the English Chamber Orchestra. These recordings have long been among my favorite Mozart, and Menuhin's newer editions, digital or no, do not displace them in my affections. There is the possible exception of No. 41, the "Jupiter," however, which does have a greater forward momentum under Menuhin than under Barenboim. Nevertheless, interestingly enough, I preferred the EMI analogue sonics to those of the newer Virgin renditions. Barenboim's orchestral sound appears more detailed to me and the stage presence has greater depth. Menuhin's orchestra may project more warmth but loses something in overall sparkle, leaning a bit to the top and bottom ends of the spectrum.

Mozart comes in all varieties these days, from small period-instrument presentations to mammoth, full-orchestra treatments, and all of them have their place. One of the best compromises, though, is probably the chamber-orchestra approach, and since Barenboim's EMI set might prove hard to find anymore, Menuhin's set (or the single-disc editions available on Erato) may be a good alternative. Certainly, one can hardly go wrong.