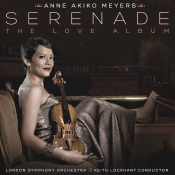 Having already reviewed three of American concert violinist Anne Akiko Meyers's numerous record albums helped prepare me for what she gives us here. Certainly, two of the most salient features of Ms. Meyers's playing are her sensitivity and delicacy of touch, so it came as no surprise when she released the present program of romantic tunes, aptly labeled Serenade: The Love Album. It is as lovely as you would expect it to be.

According to my Harvard Concise Dictionary of Music, a serenade in the 18th century was "originally a vocal or instrumental piece performed outdoors in the evening for the benefit of some particular listener. As a title for instrumental works of the period, the term was closely related to cassation, notturno, and divertimento. It may apply to lighter multi-movement works in a variety of scorings, including mixed strings and winds, often intended for soloistic as opposed to orchestral performance."

Ms. Meyers's album concentrates on twentieth-century serenades, starting with the five-movement work titled Serenade by Leonard Bernstein, followed by a number of other pieces newly arranged for the violinist and orchestra. On the present recording, Ms. Meyers plays the 1741 "Ex-Vieuxtemps" Guarneri del Gesu violin, considered one of the finest-sounding violins in the world, with Maestro Keith Lockhart and the London Symphony most ably accompanying her.

Bernstein based Symposium on Plato's work of the same name, where seven ancient Greek philosophers debate the meaning of love. It's typically Bernstein with one foot in the classical world and the other firmly on Broadway. Under Ms. Meyer's responsive control it sounds alternately tender, lyrical, and dramatic. I'm still not too keen on all of the music, but Ms. Meyers gives it full measure, her obvious virtuosity, meticulous attention to detail, and scrupulous subtlety winning the day.

The popular tunes (in their new, world-premiere arrangements) worked best for me, probably because I'm a Philistine, I don't know. Ms. Meyers shows a wonderful affinity for each of the melodies, gracing each line with joy and love. What's more, Maestro Lockhart and the LSO provide her with as sweet an accompaniment as one could hope for.

The entire album comes across as a single love song, the selections gently flowing into one another as a unified whole. If I had to make a choice of favorites, though, I'd probably pick the two Gershwin numbers for their maturity, strength, and innovation. Nevertheless, it would be hard to make such a choice, and who could not like "I'll Be Seeing You"?

Drawbacks? Well, I suppose some listeners might find the whole thing a bit too sentimental for their taste. They wouldn't be wrong, of course; love songs can be--indeed, one can make the argument that they should be--sentimental. My reaction to such criticism would be, So what? These tunes are what they are, frankly emotional, and that's the way Ms. Meyers plays them, although not in an hokey fashion. Really, it's a lovely program.

Producer Susan Napodano DelGiorno and engineer Silas Brown recorded the music for Entertainment One at LSO St. Luke's, London, in February 2015. The soloist sounds well placed, not too far forward, the violin tone warm yet detailed. The orchestral accompaniment is likewise natural and dimensional, with a realistic sense of air and depth. The sound is lifelike and easy on the ear.