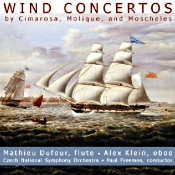 Three highlights of this 2004 Cedille release are (1) the enthusiastic playing of the Czech National Symphony Orchestra, under the direction of its Music Director and Chief Conductor at the time, the late American conductor Paul Freeman (1936-2015), and his two soloists, Mathieu Dufour and Alex Klein; (2) the fascinating combination of pieces for wind solos and ensembles that Cedille include; and (3) the excellence of the Cedille recording.

The booklet note says that this is the eighth Cedille recording with Freeman and the Czech orchestra, and one can understand why the conductor appears to like them so much. They play with a genuine flair and affection for the music.

Said music would be a late Classical era Concerto for 2 flutes & orchestra  by Domenico Cimarosa (1749-1801), here played on flute and oboe; two early Romantic concertos by Wilhelm Bernhard Molique (1802-1869), one for flute solo and one for oboe solo; and an early Romantic period Concerto for Flute and Oboe by Ignaz Moscheles (1794-1870). Just listening to the Classical work next to the Romantic works is a lesson in music history in itself, the orchestra opening up, expanding in the latter pieces, becoming not only bigger with added instruments but warmer, the music less formal this way and more smoothly flowing. I'm not suggesting one is better than the other, incidentally, just different.

The accompanying booklet note is more informative than most, and Cedille's choice of a cover painting is quite attractive. Sometimes, it's the little touches that add to one's enjoyment of an album.
Cedille Record's Bill Maylone, one of my favorite audio engineers, recorded the four pieces, and Cedille released the album in 2004. Maylone manages to capture the Classical work with a wonderful clarity, while also capturing all the warmth and charm of the Romantic pieces without losing much of that initial lucidity. The sound is natural, lifelike, vibrant, perhaps a tad bass shy (although the pieces don't require much bass), enveloping, and refreshingly entertaining.