Was there any composer more cosmopolitan yet so light and bucolic as the prolific Austrian composer Joseph Haydn (1732-1809)? Was there any musician who so thoroughly encapsulated the eighteenth-century, the "Age of Reason," while at the same time infused so much Romantic joy and enthusiasm into his work? The string quartets, of which he wrote a multitude, are as good an example as any of the man's delightful spirit.

What's more, the set contains a third, bonus disc that contains an assortment of recordings from the Emerson's previous fourteen years with DG. This extra disc includes short works or excerpts from Mozart, Shostakovich, Dvorak, Ives, Webern, Schubert, Bartók, and Beethoven. It serves as kind of the icing on the cake. 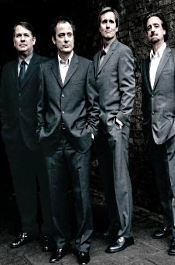 Another nice thing about this particular set is that the players have chosen quartets from among Haydn's earliest to latest groupings. Among my two favorite quartets in the set are the F minor, which leads off the album, and the D major "The Lark." To me, they represent both the humor and the passion of the composer; and, of course, the members of the Emerson Quartet play all of the music eloquently. They may not be the world's greatest string quartet in terms of absolute color and drama, but they make up for it in their obvious earnestness, impeccable execution, and love of the music.

DG's sound is good for this kind of thing, too, nicely detailed through the midrange but slightly laid back, reticent, a little soft at the high end by some standards. It makes for easy listening, but I'm afraid audiophiles may find the treble a tad too rounded off for their taste, preferring perhaps a bit more sparkle, or should I say zing, to the strings. The stereo spread also seems a bit wide for the sonic distance DG provide for the group, but these minor caveats fade into insignificance if one enjoys the Emerson String Quartet's music making.