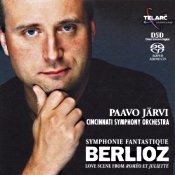 One thing is clear: This is one the best-sounding Symphonie Fantastique you're going to find around. Whether you will take to the middle-of-the-road interpretation is another story. Paavo Jarvi was the Musical Director of the Cincinnati Symphony when he made this recording in October, 2000, and it marked his first appearance for Telarc Records. They recorded the work about a year prior to his officially taking over the orchestra, by the way. In any case, he brought a rich European tradition and a fresh new outlook to the orchestra, if not to the Berlioz.

As you probably know, French Romantic composer Hector Berlioz (1803-1869) wrote his Symphonie fantastique in 1830, and it quickly became one of the most influential pieces of music of all time. Combining the programmatic elements of predecessors like Vivaldi's Four Seasons and Beethoven's Pastoral Symphony and utilizing an enormous orchestral arrangement for well over a hundred players (Berlioz employed about 130 musicians for the première), the result was extraordinary for its time period. I suspect if the composer had had a wind machine, electronic instruments, and a light show available to him, he would have used them, too. Yet the music remains extraordinary for our own time as well, even though people have repeated and imitated it at length.

In the work's five movements, the young Berlioz (at the time in his mid twenties) wrote autobiographically of the hopeless love of a young man for a woman, the young man falling into a drug-induced dream, which the composer describes in his music. The woman reappears throughout the Symphonie in the form of an idée fixe, a "fixed idea" the young man cannot shake. The fourth and fifth movements in particular are tours de force of imagination and orchestral exuberance. The hero envisions that the court has convicted him of murdering his loved one, and his jailors are leading him to the scaffold for hanging. Then, in the finale, the "Witches' Sabbath," the fates seem to have committed the young lover to some kind of purgatory or hell for his crime of passion, where he sees his beloved among the witches.

Maestro Jarvi handles all of this in a gentler, more poetic manner than many of his competitors, and perhaps that is why calling his performance "middle-of-the-road," as I did above, is being somewhat unfair. It is a pretty good realization of the work, full of excitement and passion of varying degrees. It's just that it doesn't quite open up Berlioz's bizarre fantasies as well as the four comparison discs I had on hand, which are better examples of the inventiveness this work needs. Jarvi tends to pale somewhat in their shadow. The four comparisons I used were Sir Colin Davis's second Concertgebouw reading (Philips), a remarkably mature performance; Leonard Bernstein's Orchestre National de France disc (EMI or Hi-Q), a fiery performance; John Eliot Gardiner's original instruments rendition with the Orchestre Revolutionaire et Romantique (Philips), also an animated reading; and, my favorite, Sir Thomas Beecham's French Radio National Orchestra recording (EMI), noted for its colorful interpretation. Next to these chaps, Jarvi comes off as rather straightforward--lyrical, to be sure, but also a bit matter-of-fact and to the point. Which is not at all bad, just maybe not a first choice in this repertoire. The coupling is pleasant, too.

Nevertheless, where the two-channel stereo Telarc disc scores over its rivals is in the audio department. Particularly when Jarvi reaches the final two show-stopping, stereo-spectacular movements, "The March to the Scaffold" and "The Witches' Sabbath." In these sections we can hear the effects of the extra-wide dynamic range of the Telarc release, the strong dynamic impact, the spacious dimensionality, and, of course, the famous Telarc bass drum. That said, I must admit that the Gardiner recording came close sonically, Gardiner always favoring a wide dynamic range in his recordings, anyway. Still and all, the Davis disc held its own, too, in everything but the final moments, and the Beecham sounded good as well; but the Bernstein seemed a little thin, comparatively, even in its Hi-Q audiophile realization. Perhaps people will purchase this Telarc recording primarily as a demonstration piece; whatever, it's one that can provide ample musical entertainment as well.

To listen to several brief excerpts from this album, click here: