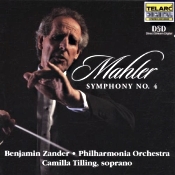 As with his other recordings of Mahler for Telarc, like the Fifth and the Ninth Symphonies, especially, Benjamin Zander's interpretation of the Fourth is probably as close to the score and to Mahler's intentions as the conductor says he could get. This doesn't necessarily make for the most ravishing, insightful, or engaging performance on record, but it does help clarify some of Mahler's mood swings, and it does produce a reasonably good recording.

Listeners have generally found the Fourth among Mahler's most accessible symphonies, and the composer intended it so. For one thing, it's short. In Mahlerian terms that means a little under an hour. More important, it maintains a positive, often cheerful, ultimately spiritual mood throughout. No funeral dirges here. Oddly, the booklet note by Michael Steinberg points out it wasn't always so. The first audiences to hear the Fourth Symphony found it disappointing, thinking it passive and undemanding. They expected more of a storm from the composer. Well, times change and people now love the Fourth as I'm sure Mahler expected them to.

Maestro Zander's performance does sound a bit underwhelming compared to others I had on hand, however, like those from Szell (Sony or HDTT), Klemperer (EMI/Warner), and even the usually reserved Haitink (Philips). Still and all, the Zander reading appears to do everything it should, particularly in the enchanting third movement Adagio, one of Mahler's most serenely beautiful pieces of music, made ever more charming under the conductor's watchful guidance.

Nevertheless, here's the thing: For me, Camilla Tilling's singing in the final movement sounds a bit earthbound. It's adequate, to be sure, just not quite the innocent and heavenly entrance into heaven we have heard before.

Anyway, that minor interpretive quibble aside, Telarc's sound is also excellent, a good combination of hall ambiance and inner detail. It is, in fact, one of Telarc's best: very dynamic, with a really solid low end. By comparison, though, the old Szell recording on Sony sounds good, and remastered by HDTT it sounds terrific. What's more, Haitink's second Concertgebouw recording on Philips is positively radiant. The Klemperer sounded a bit thin and bright alongside the Telarc release, but it was not at all unpleasant. Be that as it may, with the Philharmonia Orchestra playing so well and sounding so luxurious, it's hard not to like the Telarc offering.

As with Telarc's other Mahler recordings with Zander, the company provides a second disc accompanying the symphony whereon Zander takes us step by step through the four movements, explaining why he interpreted things the way he did. He uses additional recorded material from other labels by way of illustrating his points, a concept I liked. It reminded me of the audio commentaries on so many DVD and Blu-ray movies where the filmmakers discuss each scene. Zander tends to appear a tad pompous at times with his overly precise diction, but his ideas make sense, and he seems to be a remarkably knowledgeable individual. In any case, the second disc is a freebie, so take it or leave it.