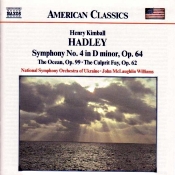 According to a Naxos booklet note, in 1933 the Musical Courier called American Romantic composer John Kimball Hadley (1871-1937), "probably the most important composer in the contemporary American musical scene." Hadley wrote five symphonies, numerous choral, piano, and operatic works, toured the world with various orchestras, and founded the Berkshire Music Festival. Such is the fleeting nature of fame, however, that by 2001 the folks at Naxos were about the only ones left to revive his music in their "American Classics" series of low-cost recordings.

The opening piece on the album is a tone poem called "The Ocean," written in 1920. It jumps right into the fray with a long, tempestuous passage expressive of a raging sea. The waters finally calm to a ripple, only to explode later into greater fury and then settle down once more. The musical expression here is reminiscent partly of the evocations of Claude Debussy and partly of English composer Arnold Bax; "Tintagel" comes to mind. The second piece on the disc is another tone poem, this one called "The Culprit Fay," 1908, based on a popular nineteenth-century poem. The music is about a fairy who loves a mortal maid, and the author apparently wrote it to celebrate the Hudson River. So, that's what Hadley's music does, too. This selection is more playful than "The Ocean," a little silly, to be sure, yet its shimmering luminosity can sometimes sound beguiling. Still, it's not the most formidable of music.

The main work on the disc is the Symphony No. 4, first performed in 1911, and representing with its four movements four moods, suggestive of the frozen North, the East, Southern ragtime, and the spirit of the West Coast. The beginning of "North" reminded me to a small extent of Ralph Vaughan Williams's Sinfonia Antarctica; the "East," to be a tad cynical, reminded me somewhat of the way Nicolai Rimsky-Korsakov might have treated The Song of Hiawatha; the section titled "South" is very Scott Joplin-like; and "West" sounds like something later Hollywood cinema might have adopted. Program notes by Hadley himself complement the arrangements, although they may not help much to make a person appreciate the music, which seems to me too derivative of other, better things.

The performances of Grammy award-winning conductor John McLaughlin Williams and the National Symphony Orchestra of Ukraine probably do as much justice to the music as one might expect. As I had never heard the works before and had no comparisons to make, I can only say that Maestro Williams seems to communicate what the music demands of him and his players, making it as appropriately colorful and fun as possible. At the same time, it's hard to tell with music as undemanding as this.

The sonics Naxos provided for Williams and the Ukraine Orchestra are not exactly what I'd call transparent, but they do sound warmly detailed and reproduce a reasonably good stage depth, a solid dynamic impact, and a fairly wide frequency range. It's pretty nondescript sound, actually, not bad but not great, either.

In all, this is a reasonably enjoyable collection of highly accessible though probably justifiably forgotten orchestral music that listeners can hear for themselves for relatively little cost.

Email ThisBlogThis!Share to TwitterShare to FacebookShare to Pinterest
Labels: Hadley