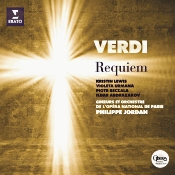 Verdi's Requiem Mass surely ranks among the greatest of all sacred choral music, right up there with Bach's Mass in B minor, Beethoven's Missa Solemnis, and Mozart's Requiem. You probably already own a favored recording of the work, but that doesn't stop record companies from releasing new interpretations every year, like this new one from Maestro Philippe Jordan, soloists Kristin Lewis, Violeta Urmana, Piotr Beczala, Ildar Abdrazakov, and the Paris National Opera Orchestra and Chorus.

A little background: Italian composer Giuseppe Verdi (1813–1901) wrote his Messa da Requiem in memory of Alessandro Manzoni, an Italian poet and novelist that Verdi admired, the Requiem premiering at the San Marco church in Milan, May 22, 1874. The Requiem is, of course, a musical setting of the Roman Catholic funeral mass, scored for four soloists, a double choir, and orchestra.

For many years, since the late Sixties at least, my own favorite Verdi Requiem has been Carlo Maria Giulini's rendering with an all-star cast on EMI. Although Verdi specifically indicated that he didn't want his Requiem sung operatically--a condition, no doubt, meant to foil the critics of his time who didn't think he could produce anything worthwhile except opera--the Giulini recording is, in fact, a refined yet highly emotional, operatic experience. Likewise, John Eliot Gardiner's period-instruments account on Philips is on the dramatically operatic side, if sounding a bit more sedate than Giulini; nonetheless, I would guess that Gardiner brings us closer to the composer's intentions. And then there's Abbado on DG, a conductor who sees the work as just what it is, a Celebration Mass for the dead and as such fills it not only with the powerful Wrath of God but with gentle and comforting words of mercy and forgiveness, too.

Which in a rather roundabout way brings us to this new recording from Jordan. The conductor seems to want it all ways at once, never quite latching onto a coherent style or structure. The fact is, it's a very fast reading, making Jordan's recording one of the few to fit on a single disc. Indeed, at seventy-seven minutes it's probably the fastest Verdi Requiem I've ever heard. This may be great for listeners who would rather not get up and change a disc in mid performance, and it may have been great for the live audience who heard Jordan's playing it in concert during the recording, but for home listening it makes for a somewhat tiring, sometimes breathless affair.

In addition to Maestro Jordan's rather fast delivery is his tendency to play up, maybe even exaggerate, every dynamic contrast that comes his way. He can start at a whisper and the next moment knock you out of your seat. These quick tempos and wide dynamic fluctuations might make for an exciting performance, but it doesn't seem like a performance entirely in line with Verdi's goals. 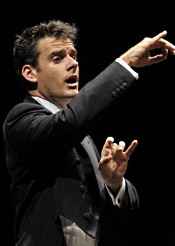 In a booklet note Jordan says that performing the Requiem has enabled the Orchestra and Chorus of the Opera "to demonstrate  their understanding of, and feeling for, this overwhelming music." The key word here may be Jordan's belief that the music should be "overwhelming," and he wants to play it that way, making it more monumental than the triumphal march from Aida. Everything about the presentation seems a tad inflated, in the process making the music that much less dramatic, less spiritual, less operatic, and less inspiring than it could be otherwise.

On the other hand, there is no denying the impact of the phrasing, dynamic contrasts, and occasionally dizzying speeds. And there's no denying that the soloists, chorus, and orchestra aren't generally up to the challenge. Jordan's is an interpretation of variety, violent tensions, wild mood swings, but not a lot of contemplative soul searching except perhaps in the Lacrymosa for quartet and chorus and the Lux aeterna for soprano, tenor, and bass, which do come off pretty well.

Erato producer Arnaud Moral and balance engineer Michel Pierre recorded the music live in concert on June 10-11, 2013. There is a very wide dynamic range involved, which I usually wouldn't complain about, except that in this case it tends to be a little distracting from the beauty and solemnity of the music. Besides, when combined with some fairly close live miking, the voices get somewhat harsh and bright in louder passages. It adds a degree of ear fatigue a listener probably doesn't need. Otherwise, the audience members remain quiet enough that they are seldom obtrusive. Although the stereo spread is broadly spaced across the sound stage, depth suffers a bit. So, the sound is impactful, forward, and a little flat; it's clear, to be sure, but not particularly natural or lifelike. Thankfully, the engineers have edited out the final applause.