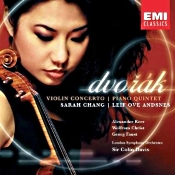 Sarah Chang's recording of Dvorak's Violin Concerto with Sir Colin Davis and the LSO has been around for more than a decade now and remains one of the best versions currently before the public. It may not be the absolute best ever (my own favorite is still Perlman's mid-Seventies release with Daniel Barenboim, also with the LSO), but it's close. Different but close.

If there can be such a thing as a feminine approach to a work, that's the difference between this 2001 recording and Perlman's. The Dvorak Violin Concerto is a composition of startling contrasts, yet Chang and Perlman approach them differently. Dvorak meant the first movement to sound somewhat melancholy, almost bittersweet, yet Chang makes it more lyrical, more lilting, more ethereal, while Perlman, still mercurial, seems more granite solid. In the second, slow movement, Dvorak turns his piece into a ballad, interrupted only occasionally by turbulent outbursts, and again it's in these outbursts that Perlman appears slightly more in command. The final movement finds Dvorak returning to his roots in Czech folk music, and here it's a toss-up between Chang and Perlman as to which artist is more idiomatic and which conductor, Sir Colin Davis or Daniel Barenboim, is more supportive and sprightly. Both sets of musicians are certainly very fine, warm and powerful throughout, Ms. Chang dancing through the finale with sensitivity, exuberance, and strength. 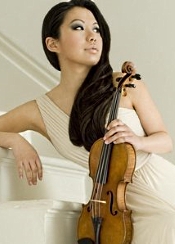 The coupling on Chang's disc is Dvorak's Piano Quintet, although to be fair the violin seems always at center stage. It's a long chamber work that's all over the map thematically from exquisitely beautiful poetry to raging storms and everything in between. The group Ms. Chang performs with--Leif Ove Andsnes, piano; Alexander Kerr, violin; Wolfgang Christ, viola; and Georg Faust, cello--sound like they have been playing together forever, their unity is so complete. The Quintet is one of Dvorak's most-popular works and deservedly so, especially when you hear this group perform it. It may not be the best recorded account available, that is primarily a matter of taste, but like the Concerto it is surely among the best.

As far as concerns the sound, EMI (now Warner Classics) recorded the music in June 2001 at  Watford Colosseum, London and gave both pieces on the disc a fairly decent image balance, the violin in the Concerto never too dominant as it is in EMI's earlier recording with Perlman where the soloist is well forward. However, the Chang recording emphasizes the high end more than the older Perlman disc did, making the sound of the Chang version appear thinner, lighter, and brighter. Fortunately, it's not entirely objectionable and, in fact, may even serve to more greatly emphasize the lighter, gentler approach I mentioned earlier that Ms. Chang brings to the Concerto. In all, it's a lovely enough recording.