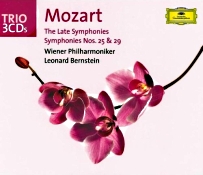 When conductor-composer Leonard Bernstein left the New York Philharmonic his performances by and large tended to change. Especially after he took up with the Vienna Philharmonic, his interpretations seemed to slow down considerably, lose some of the electric charge that drove his earlier work. Some people attributed this to age and called the later readings "mature." Others just thought he was getting old and tired. Not so, however, with these mid 1980s' recordings of the late Mozart symphonies, reissued by DG in 2003. Like the live performances I was privileged to hear from him around this time period, the recordings show no signs of anything slowing down whatsoever.

Taken as a whole, this set is undoubtedly one of the best all-around collections of late Mozart symphonies available today, and they come in DG's low-priced Trio series, a bargain by any standards. Every piece of music on the three discs sounds exactly right. Not only right, but sometimes downright wondrous. Nos. 36 and 41, for instance, the gems of the set, are never ordinary yet they feel comfortably worn. The tempos are perfectly judged, the caressing inflections lovingly applied, the outer movements spirited, the slow movements gentle and lilting. These symphonies are noble and uplifting, delicate and soothing as the occasion demands. This is the Bernstein of old: romantic and nostalgic, open and bighearted. I had heard only his VPO "Jupiter" before coming to this set, and I was mightily impressed by the rest of the box. 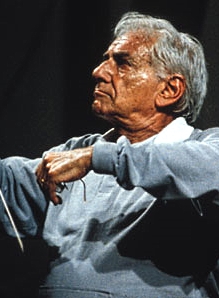 Yes, there were other conductors for whom one could make a case for better (or more appealing) interpretations of individual symphonies. We cannot discount the likes of Bohm, Walter, Klemperer, Karajan, Barenboim (my own favorite), Marriner, and the like in particular works. But taken overall, it's hard to say that any of them surpassed Bernstein.

The only minor snag in this three-disc, budget-priced set is some of DG's sound. I say "some" because it varies. Half of the pieces Bernstein recorded live, as he was fond of doing, and it shows. The live recordings, Nos. 35, 39, 40, and 41, seem slightly more recessed, more distantly miked, producing a softer, mellower, and occasionally more hollow sound. The recordings made without an audience appear better detailed, though not always more realistic. Nevertheless, I preferred the cleaner, clearer sonics of the absent audience. You'll hear the difference immediately, as those done without an audience also have the appearance of being a touch louder in volume.

In any case, I wouldn't worry overmuch about the sound. The performances are solidly in the grand tradition, the glorious Vienna forces playing superbly as always, and Bernstein at the top of his game.