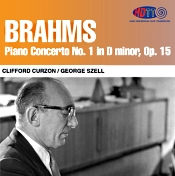 Here is another absolute, genuine, certifiable, dyed-in-the-wool classic from HDTT (High Definition Tape Transfers). English pianist Sir Clifford Curzon made the recording with George Szell and the London Symphony Orchestra over half a century ago, and no one has yet to surpass it. Now remastered to near-audiophile standards, it’s hard to see how any new contender will equal it.

Curzon (1907-1982) made a ton of recordings in his lifetime, yet he left us with only a relative few. That’s largely because he was a notoriously fussy perfectionist when it came to what he wanted the public to hear and refused to allow record companies (mainly Decca, with whom he recorded almost exclusively) to release any number of his recordings he didn’t think were up to his standards. He just didn’t feel satisfied with them. Fortunately, the Brahms was among the few things to get through and remain in the catalogue.

As I’m sure you’re aware, Brahms wrote his Piano Concerto No. 1 in 1858 while he was still a fairly young man. I continue to see the work as all craggy and monumental in scope, and Curzon’s potent interpretation (one of the first I remember hearing) is a chief reason for how I think of the Brahms today. The work also abounds in energy and vitality, perhaps the energy of youth, and here I think of Curzon as well, even if he was in his mid fifties when he recorded it.

Anyway, after a lengthy and properly regal orchestral introduction from Szell and the LSO to set the tone, Curzon enters with elegant power. While the First Piano Concerto may be a youthful work, Curzon does not overemphasize the fact with any excessive playfulness. Indeed, his is a mature, patrician account, frank and straightforward, and all the better for it. Yet it is also a kind of cozy account, especially in terms of the interplay between soloist and orchestra. Everyone sounds comfortably together, from the grandest gestures to the most intimate moments. Curzon glides through the first-movement Maestoso with the appropriate measure of majesty, yet with a delicate lyricism as well, and Szell seems perfectly attuned to the pianist's every mood and need. 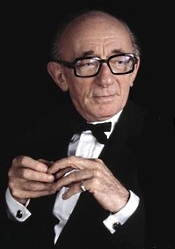 In the second-movement Adagio Curzon again finds his range, although his pace is a tad more leisurely than other pianists of my experience. However, his step is never loose or slack, merely relaxed. The playing is quite lovely, the movement said to be an elegiac tribute to Brahms’s late mentor, Robert Schumann. Then, Curzon and company go out on a agreeably jubilant note in the finale, a spirited peasant dance with variations that sparkles with good cheer.

The crack Decca production team of producer John Culshaw and engineer Kenneth Wilkinson recorded the concerto at Kingsway Hall, London, in May 1962. HDTT transferred it from a 4-track in 2014. The orchestral support sounds big and bold, with plenty of dynamic range, impact, warmth, and clarity. In their own remastering Decca had already minimized much of the hard glassiness of their previous CD, and here HDTT does them one better. The HDTT sound is quite smooth for the most part, with a good degree of naturalness. Still, the recording itself is somewhat flat and one-dimensional, but that's apparently the way Decca recorded it. The piano sounds realistically well balanced with the orchestra, out front but not over prominently so. It sounds about the way a piano would appear if you were sitting at a moderate distance at a live concert. In short, the HDTT remastering and transfer are excellent and make a good thing better.

For further information on HDTT discs and downloads, you can check out their Web site at http://www.highdeftapetransfers.com/storefront.php.

To listen to a brief excerpt from this album, click here:
Posted by John J. Puccio