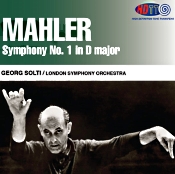 For years now I've been undecided about which of Maestro Georg Solti's recordings of Mahler's First Symphony I liked best, the earlier, analogue one with the London Symphony Orchestra presented here or the later digital release with the Chicago Symphony. I had always preferred the earlier performance but liked the later rendition's sound. Now, thanks to HDTT's remastering of the LSO account I can have my cake and eat it, too. Their refurbishing of the older recording sends it to the top of the list of available Mahler Firsts.

Anyway, you probably know that Austrian composer and conductor Gustav Mahler (1860-1911) wrote his Symphony No. 1 in D major in 1888 and premiered it in 1889, calling it at first a symphonic poem rather than a symphony and temporarily, at least, giving it the nickname "Titan." It wasn't long, however, before he revised it to the four-movement piece we know today and dropped the "Titan" designation. The work's popularity soared in the late Fifties, the beginning of the stereo age, possibly because the composer scored the First for a very large orchestra, and with its soaring melodies, enormous impact, and dramatic contrasts it makes a spectacular listening experience and an ideal way to show off one's stereo system. Plus, the First is one of Mahler's briefest symphonies, making it an ideal length for folks like me with short attention spans.

In the Symphony No. 1 Mahler said he was trying to describe a protagonist facing life, with a progression beginning with the lighter moments of youth and proceeding to the darker years of maturity. In the first movement, "Spring without End," we see Mahler's youthful hero in the symbolic stirring of Nature before a long spring. In the second-movement Scherzo, "With Full Sail," we find Mahler in one of his early mock-sentimental moods, displaying an exuberance that he may have meant as ironic. In the third movement we get an intentionally awkward funeral march depicting a hunter's fairy-tale burial, which comes off as a typical Mahler parody. It may represent the hero's first glimpse of death or maybe Mahler's own recollection of a youthful encounter with the death of a loved one. The movement has long been one of the Mahler's most controversial, with audiences still debating just what the composer was up to. Then, in the finale, Mahler conveys the panic "of a deeply wounded heart," as his central figure faces the suffering of life and fate. Still, Mahler was a spiritual optimist and wanted Man to triumph in the end. In the final twenty minutes or so, Mahler pulls out all the stops and puts the orchestra into full swing.

Not only does this earlier of Solti's Mahler First recordings sound more lively and energetic than his later digital effort, it really is quicker. Solti takes all four movements at a brisker, more enlivened pace than he did twenty years later. It shows in every note we hear, the electric vitality and spirit. Yet the conductor never overdoes anything, either. This may be a high-powered performance, but it is not an exaggerated one. Solti's way with the opening lines, the awakening of spring, is really quite enchanting, probably the most impressionistic, atmospheric reading of this sequence on disc. Then he builds to some very exciting crescendoes and climaxes, with ravishing playing from the LSO. When the conductor does slow down, it's with warmth and grace, often sweet and moving. Yet it's probably the big moments one remembers most, like the closing of the first movement and the opening of the finale. Here, you'll find Solti in full swing, aiming for the center-field seats, while still maintaining the shape and structure of the music, never distorting it for sensational effect.

HDTT remastered the present disc from a London 4-track tape originally recorded in February 1964 at Kingsway Hall, London, by Decca producer John Culshaw and engineer James Lock. Compared to the old Decca disc, the new HDTT remastering is quieter, cleaner, more transparent, and more dynamic. Not only is the definition crisper and more solid, there is a greater sense of orchestral air and depth than I've heard from the recording before. Additionally, there's a greater smoothness involved, a more natural sound than ever. And if that weren't enough, it even sounds better to me now than Solti's 1984 digital account: more open and more realistically distanced, with clearer highs (if very occasionally a little aggressive), stronger impact, quicker transient response, and more detail. As I say, it goes to the top of my list of favorite Mahler First recordings, sonically and musically.

For further information on HDTT discs and downloads, you can check out their Web site at http://www.highdeftapetransfers.com/storefront.php.