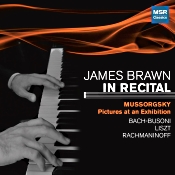 Although British pianist James Brawn is hardly a young man anymore (b. 1971), he has only recently begun a recording career with MSR Classics, so I suppose you can excuse people like myself for not recognizing his name until now. But belated or no, he appears to be off to a flying start with his first few albums. He's been winning awards since he was a child, teaching, and performing (mainly in New Zealand, Australia, and England) to great acclaim, and this new recording makes one understand his appeal. He is a consummate artist.

Mr. Brawn begins his recital on Volume 1 (of what will presumably be a series of such concerts) with the Chaconne from the Violin Partita No. 2 in D minor by Johann Sebastian Bach (1685-1750). A chaconne is an early dance form, probably Spanish in origin, in moderate triple meter, this one the concluding item from a set or suite of numbers for violin. Ferruccio Busoni arranged the piece for piano in 1893, and pianists have cherished it ever since.

The variations within the Chaconne allow Brawn the flexibility to offer a brilliant display of pianism, the artistry always present yet never interfering with or distracting from the music itself. Brawn's performance is alternately dark and dramatic, the pianist responding quickly and delicately to each new inflection in the score.

After that are two works by Franz Liszt (1811-1886), starting with the familiar Mephisto Waltz No. 1, which is about as opposite the preceding Bach as you can get, filled as it is with Romantic, melodramatic touches. While the very devil is in the fiddle here, as it should be, Brawn is careful not to exaggerate the ornate flourishes for pure show. The piece is a little symphonic poem that gracefully yet energetically tells its story of Faust and Mephistopheles at a wedding party. Brawn's interpretation brings out all the lush, eerie beauty in the piece, as well as the passion and excitement.

Then comes the only slightly less-familiar Consolation No. 3 in D-flat Major. If it reminds you of Chopin's Nocturne No. 2, as it did me, it's no coincidence. Not only are the tone, tempo, and key the same, the melody itself is quite similar. In Brawn's hands, it's exquisitely beautiful and expressive.

Next, we come to the centerpiece of the recital, Pictures at an Exhibition by Modest Mussorgsky (1839-1881) in its original piano score. Of course, the piece wouldn't really become as popular as it is today without its various and later orchestral transcriptions, but the piano version is no slouch, either. Obviously, it's the most pictorial of the works on the program, featuring a gallery of portraits that describe people, places, and events. It requires the pianist create little tone pictures of diverse moods and character, a process in which Mr. Brawn succeeds admirably. 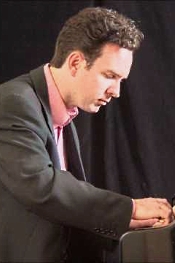 Here's also where Brawn gets to show off a bit, with each portrait perfectly judged and perfectly well characterized. Sections that stood out for me include the mysteriousness of "The Old Castle," the humor of "The Ballad of the Unhatched Chicks," the hustle and bustle of "The Marketplace," the creepiness of "The Catacombs," and the exhilaration of "The Hut on Fowl's Legs." I would liked to have heard a bit more splendor and grandeur in "The Great Gate of Kiev," but otherwise this is among the best piano versions of the Mussorgsky piece I've experienced.

Finally, Brawn closes the recital with the Prelude in B minor by Sergei Rachmaninov (1873-1943) and the Prelude in C Major by J.S. Bach, which brings us full circle. Brawn's program is impressively varied, showing off all of the pianist's technical prowess as well as his sensitivity to the nuances of the piano. His playing is virtuosic and exciting at times, yet soft and lyrical when necessary. But most of all, it's simply fun to listen to. Fans of piano music cannot miss.

Producer Jeremy Hayes and engineer Ben Connellan made the recording for MSR Classics at Potton Hall, Suffolk, UK in August 2012. The piano sounds crisply articulated, with solid impact and a firm transient response, without being bright or forward in any way. Moreover, we hear a pleasantly mild ambient bloom around the notes, making the sound not only well defined but moderately warm and natural, too. The miking is not so close as to stretch the piano across the room, making for an even more realistic presentation.

To listen to several brief excerpts from this album, click here: