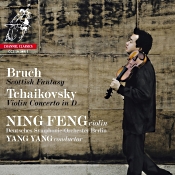 It happened again. Even though I probably listen to more classical albums every week than most classical-music fans buy in a month, I can't keep up with all the new artists out there. Such is the case with violinist Ning Feng on this album of Bruch and Tchaikovsky violin concertos. As a matter of course, I did not recognize the young man's name. According to his biography, "Born in Chengdu, China, Ning Feng studied at the Sichuan Conservatory of Music and London's Royal Academy of Music where he was the first student ever to be awarded 100% for his final recital. The recipient of prizes at the Hanover International, Queen Elisabeth and Yehudi Menuhin International violin competitions, Ning Feng was First Prize winner of the 2005 Michael Hill International Violin Competition (New Zealand), and in 2006 won first prize in the International Paganini Competition, following in the footsteps of violinists such as Kavakos, Kremer and Accardo." What's more, this is his fifth recording. Nor was I familiar with the conductor Yang Yang who accompanies Feng with the German Symphony Orchestra Berlin. So much for what I don't know. Now I do.

Anyway, the program begins with the Scottish Fantasy for Violin and Orchestra, Op. 46 by German composer and conductor Max Bruch (1838-1920). Bruch completed it in 1880 and dedicated it to the violin virtuoso Pablo de Sarasate. As I'm sure you know, the Fantasy is Bruch's survey of Scottish folk tunes, in this case over thirty minutes of them, loosely tied together in four movements.

The Fantasy starts off rather solemnly with an introduction marked "Grave," which is slow and somber, indeed, before giving way to the more familiar and frolicsome melodies that follow. Possibly the first thing one must comment on about this new recording is the extremely relaxed approach Feng and Yang take to both concertos. Every movement is slower than I can remember anyone taking them. OK, I probably have heard slower, but memory is not my best friend. In any case, the interpretations take some of the luster and excitement out of the music. Fortunately, however, the musicians replace any missing pieces with a heartfelt sweetness that is hard to resist. Bruch's Adagio, for instance, floats gently overheard, doing much favor and grace to the Scottish love song that inspired it. The Scherzo, despite Feng's gentle handling of it, has a charming flow that melds imperceptibly with the folk tune of the Andante that follows it. Yes, there is a greater degree of sentimentality to these things than one usually hears, but it's a delightful sentimentality no less. The finale is the most overtly "Scottish" of the Fantasy's music, and both Feng and Yang have a good time with it, although again at a reduced pace.

Feng plays the violin with a smooth, elegant touch, while the German Symphony Orchestra Berlin demonstrate a precise control and a sympathetic enthusiasm. While the results are not quite in the same league as Perlman and the London Symphony or Heifetz and the Chicago Symphony, in Feng and Yang's slightly more scaled-back way they are attractive in their own right. 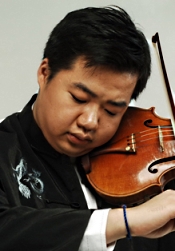 As famous as the Bruch work is, it doesn't compare with the popularity of the Violin Concerto in D, Op. 35 by Russian composer Peter Tchaikovsky (1840-1893). He wrote it in 1778, premiering it several years later because the person he originally wanted to perform its first public appearance, the virtuosic violinist Leopold Auer, deemed it unplayable. As he does with the Bruch, Feng approaches the Tchaikovsky piece in a lighter, more lyrical manner than most other major violinists. The work comes off sounding closer to a love sonnet than anything else, surely a valid reading of the score, if losing a little something in grandeur and vitality along the way. It is a remarkably soaring, beautifully poetic realization of music that other violinists have done to death in showier, gaudier performances, some of the visceral thrills replaced by a milder but hardly less likable temperament.

Channel Classics recorded the music at Teldex Studio Berlin in November 2012 using some pretty impressive equipment: B&K and Schoeps microphones, DSD Super Audio and Pyramix digital converters, Audio Lab and B&W speakers, van Medevoort and Classe amplifiers, a Rens Heijnis custom mixing board, and Van den Hul cables. Certainly, the sound is realistic in the extreme in the two-channel SACD mode to which I listened, with a prominent bass, a detailed midrange, and extended highs. But most impressive is its dimensionality--its breadth, depth, warmth, and air. The violin seems a tad close to me, but there's nothing wrong with emphasizing the soloist. There are no harsh edges here, either, no brightness or glassiness. It's all quite natural and appealing without ever sounding dull or soft.