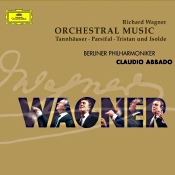 It's hard for any disc to go wrong when the conductor and orchestra are working with the music of German composer Richard Wagner (1813-1883), especially when the conductor and orchestra are among the best in the world. So it goes with this album of Wagner orchestral music from the late Maestro Claudio Abbado and the Berlin Philharmonic. The Overture to Tannhauser, the Prelude from Parsifal, a suite from Parsifal, and the Prelude and Liebestod from Tristan und Isolde comprise the goods. The interpretive results vary from more than adequate to excellent.

Fact is, though, there is a good deal of competition out there for Wagner orchestral music, and it may take something more than merely "more than adequate" to persuade buyers to part with their hard-earned cash for yet another collection of stuff they probably already have. Admittedly, record companies don't record suites from Parsifal very often, so for that reason alone one might want the disc. But for me, the reason for purchase is the Tristan music. It's as lush and romantic as any interpretation I've heard, perfectly befitting the doomed love affair it describes. The Tannhauser Overture and Parsifal Prelude, however, seem a bit more perfunctory; as I say, still adequate but not great. Not in the category of a Karajan with the same orchestra and label, for instance, or a Klemperer on his splendid collection of Wagner music reissued by EMI (Warner) in their "Great Recordings of the Century" series, which I'd like to take this moment to recommend all over again.

Anyway, Abbado's way with Wagner is quite rhythmic and melodious. He tends to bring out all the sweetness in a composer who sometimes can seem only rather grandiose and imposing. Abbado tends to caress the lines a bit more than other conductors and coax more-relaxed yet still penetrating performances from the music. It means Wagner is still Wagner, but his music appears more approachable than ever. 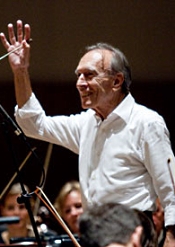 In the early days of digital sound, DG's sonic efforts for people like Karajan seemed to me too hard and brittle, so over the years the company appeared to tone it down and make things more realistic and listenable. With this release they may have erred too much in the opposite direction. They recorded the two Preludes and the Liebestod on this recording live in the Grosses Festspielhaus, Salzburg, in 2002 and recorded the rest of the music in the Philharmonie, Berlin, in 2000. In both cases, the sound is a little soft and laid-back, so much so that at times it obscures some of inner-midrange detail. For a comparison, I listened to the Klemperer recordings made thirty or more years earlier to hear a difference in clarity and realism. Not that Abbado and company sound bad; indeed, they are quite pleasing and easy on the ear, and the slightly softer, warmer focus may actually be a blessing in the Tristan und Isolde music, imparting to it a more dreamlike quality.

In any case, the Berlin Philharmonic is, as always, in splendid form, producing as rich and precise a presentation as any you're likely to hear; Maestro Abbado serves up a tasty heaping of Wagner's most romantic Romanticism, at his absolute best, as I say, in the lush textures of Tristan und Isolde; and DG's engineers serve up a mellow concoction of sounds. Personally, I would not recommend the disc as an absolute and only first choice in Wagner, but for the collector who has everything it's probably a must buy.