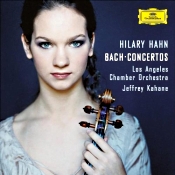 This is one I nominated some years ago for a "Best of the Year" award. At least, it was an award winner with me. Except for a minor reservation about the sound, I can still recommend the disc with almost complete assurance.

Perhaps because Ms. Hahn was relatively young at age twenty-three when she recorded these pieces in 2002-03, she was able to bring to them a youthful vitality that is sometimes missing in the performances of older artists. Yet the vitality in no way suggests immaturity or reckless abandon. Indeed, it brings to the works a contemporary feeling, making them sound as though written in and for our own era. Ms. Hahn makes all three of Bach's familiar Violin Concertos sound new again through her lively, spirited, yet thoughtful interpretations.

I suppose some listeners might quibble that Ms. Hahn takes things a bit faster than most older, more-traditional violinists do, but her performances are much in keeping with today's historically informed style, though not as frenetic as some period-instruments groups perform the pieces. Anyway, if the Violin and Oboe Concerto that accompanies the Violin Concertos seems a bit more conservative by comparison, it is no less persuasive. 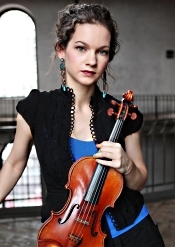 Ms. Hahn leads off Bach's three Violin Concertos on the album with possibly the most popular of the bunch, the E Major, BWV 1042, with its well-known opening movement running along as briskly yet as attractively as I've heard it. Of course, all three of the Violin Concertos begin with showstopping opening movements, followed by sublimely beautiful slow movements, and concluding with brash, often overexuberant finales. Even though I've never cared much for those finales as much as the rest of the music, even here Ms. Hahn brings a delightful sense of fun to the occasion, and she's splendidly accompanied by Jeffrey Kahane and the strings of the Los Angeles Chamber Orchestra.

My only quibble I alluded to earlier: it's about the depth of the sound, which is almost nil. The instruments are pretty much strung out along a straight line from left to right, with little sense of the group's size or shape. Otherwise, the sound is warm, smooth, well defined, terrifically well-balanced, and easy on the ear. For a modern recording of these Bach works played on modern instruments, this remains one of the best current choices, slightly eclipsing Grumiaux's old Philips recording in sound quality and almost everybody else in performance.