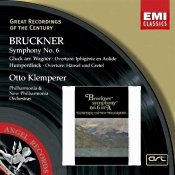 Of Bruckner's last six, most-important symphonies, the Sixth is among his least performed and least recorded. I suppose there are reasons for that, most prominent of which is its not sounding much like the rest of the stuff the man wrote. The work is not really as awe-inspiring or as structurally coherent as Bruckner's other famous symphonies, and it is to Otto Klemperer's credit that he was able to make as much out of it as he did. This 1964 recording is one of the best we'll probably ever get.

The first movement has always reminded me of the score to some epic movie. Maybe twentieth-century film composers looked to the nineteenth-century Bruckner for ideas. It wouldn't be the first time. Klemperer takes it in a broad, grand sweep. The second-movement Adagio is far more placid than the first, but it hasn't quite the ethereal, otherworldly inspiration that marks some of Bruckner's best slow movements. Here, Klemperer is fairly direct and not a little quick paced. The Scherzo is actually the first point in the symphony that the composer seems himself, the movement being a restless contrast of grandiose reflections and serene respites and, interestingly, a possible inspiration for the later Scherzos of Mahler. The Finale barely hangs together in many other conductors' hands, but Klemperer seems to make it all of a piece. Indeed, Klemperer so loved this symphony he practically made it his own, championing it long before most of Bruckner's music had come back into favor. 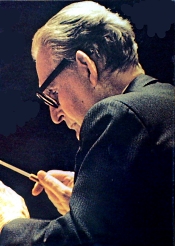 A booklet note tells us that Klemperer's longtime producer, Walter Legge, would never let him record the Sixth because he didn't think audiences were ready for it. When Legge disbanded the old Philharmonia Orchestra and the ensemble quickly reformed without him, Klemperer got his way and sans Legge made the Sixth a priority. I have to admit that even though I can't remember enough of the Sixth to hum a note, I have always admired, nay, loved, Klemperer's way with it. With his usual granitelike style, he seems to make it all hang together and work better than most anyone.

Along with the Sixth come the overture to Humperdinck's Hansel und Gretel and Wagner's arrangement of Gluck's Overture to Iphigenie en Aulide. Here, Klemperer is on slightly less-sure ground, yet the performances come over with more than adequate passion and glow.

EMI (now Warner Classics) recorded the Bruckner in 1964 at Kingsway Hall, London with producer Peter Andry and balance engineer Robert Gooch. The sound they obtained is possibly no less accountable for the recording's success than Klemperer's conducting. Remastered in 2003 using EMI's Abbey Road Technology and a part of the "Great Recordings of the Century" series, the Sixth Symphony sounds smoother and more natural than ever, appearing for all the world as good as or better than most new classical releases. However, EMI recorded the two accompanying pieces, the overtures to Gluck's Iphigenie en Aulide and Humperdinck's Hansel und Gretel, about four years earlier in 1960, and they sound leaner and, consequently, brighter. They haven't quite the warmth and realism the Bruckner does, but Klemperer well characterizes them all the same.