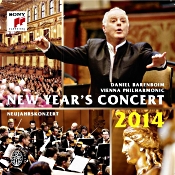 As remarkable as it seems to me, another year has gone by. I’d swear that when I received this recording for review, I thought it could not have been but a couple of months since I had reviewed last Vienna New Year’s Concert. It was an entire year. Time flies when you’re enjoying good music.

As you know, the Vienna Philharmonic’s tradition of presenting a New Year’s Concert got started in 1941 and has been going strong ever since. Companies recording the concerts over the past few decades have included EMI, RCA, DG, Decca, and Sony. Moreover, in keeping with the orchestra’s tradition of having no permanent conductor, the orchestra invites a different conductor to perform the New Year’s duties each year. These conductors in recent times have included some of the biggest names in the business, including Carlos Kleiber, Willi Boskovsky, Herbert von Karajan, Claudio Abbado, Zubin Mehta, Lorin Maazel, Seiji Ozawa, Riccardo Muti, Georges Pretre, Nikolaus Harnoncourt, Mariss Jansons, Franz Welser-Most, and for 2014 Daniel Barenboim.

Each year the Concert’s producers try for something a little different in the way of programming, with this year’s theme finding, well, some things a little different. Rather than the usual stuff from the Strauss family, we get some little-heard items from Johann Sr., Jr., Eduard, and Josef, plus some music from composers outside the Strauss family: Joseph Hellmesberger, Richard Strauss, Joseph Lanner, even Frenchman Leo Delibes. It makes for a more-varied program than we usually hear in these affairs, and Maestro Barenboim, always the alert musician, brings out the best in them. As does the magnificent Vienna Philharmonic, sounding as rich and resonant as ever, even if the live recording itself is not always up to audiophile standards.

Daniel Barenboim is a fine pianist, of course, but his name first came to my attention as a conductor when he recorded a series of late-Mozart symphonies with the English Chamber Orchestra for EMI in the early Seventies. They remain among my favorite Mozart symphony recordings to this day. Since then, I have admired his lively, no-nonsense approach to conducting, and it shows further in these Sony Classics discs. His New Year’s interpretations are largely free from exaggeration, with only a few appropriate nods to the crowd in the more-famous Strauss Jr. pieces.

Where Barenboim really shines on this album, though, is in the lesser-known material: Eduard Strauss’s Helenen-Quadrille, based on themes by Offenbach; Josef Strauss’s Neckerel (“Teasing”) polka and Friedenspalmen (“Palms of Peace”) waltz, commemorating the one-hundredth anniversary of the outbreak of World War; Strauss Sr.’s Carolinen-Galopp; Hellmesberger’s Vielliebchen Polka francaise; Lanner’s Die romantiker (“The Romantics”); Delibes’s Pizzicati from Sylvia; Richard Strauss’s Mondschelnmusik (“Moonlight Interlude”) from Capriccio; and Strauss Jr.’s  Seid umschlungern, Millionen (“Receive My Embrace, Ye Millions”) waltz, among many more, twenty-one selections in all, plus the annual New Year’s address. 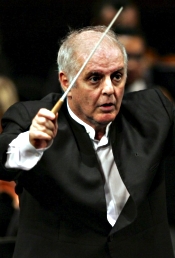 It’s a more-adventurous program than in most years past, yet Barenboim would never let the event go by without providing several must-haves. Not only does he give us a wonderfully sentimental yet atmospheric Tales from the Vienna Woods, but two favorites that seem to be written into the UN Charter that must be performed every year without fail: The Blue Danube waltz and the Radetzky March, the latter closing the show as always with the audience joining in.

One minor quibble: Sony provide no timings for any of the tracks, neither on the outside of the case nor in the booklet insert. For the record, the discs provide fifty-eight and fifty-four minutes of music each, but I would have liked timings for individual selections.

Producer Friedemann Engelbrecht and engineers Tobias Lehmann and Rene Moller recorded the concert live at the Goldener Saal des Wiener Musikvereins, Vienna, Austria on January 1, 2014. What you have to understand at the outset is that record companies don’t mean these Vienna New Year’s recordings to be audiophile discs. They are documents of a celebration, and the live audience is as much a part of that celebration as the music or the musicians.

The sound this time out is typically close, although it is not so close as it has been in some years, and it’s less bright, hard, and strident. Indeed, the sound is quite smooth and warm, even a little soft, with very strong dynamics. The audience, as I say, is always present, especially between tracks, with applause, coughs, wheezes, and general shuffling of feet. That’s part of the occasion.