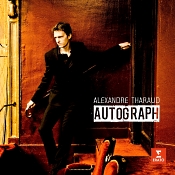 French pianist Alexandre Tharaud has an extensive discography consisting of dozens of albums covering almost every major composer for the piano, including Bach, Chopin, Grieg, Poulenc, Ravel, Satie, Schubert, and a host of others but, oddly, no Beethoven. On this 2013 album Tharaud presents twenty-three short selections by various noted composers but, again, no Beethoven. He says the album, called Autograph and which he subtitles Bis-Encores, is a collection of music that sums up his repertoire and his career. Fair enough.


So, the album comprises mostly light, airy, Romantic, ethereal piano music. Maybe Tharaud sees himself as the gentle, thoughtful, sensitive type. It’s certainly not a bad way to go; although it doesn’t make the for the most-exciting of programs, it makes for beautiful listening, and Tharaud is as good at it as anyone could be at it. The material is light, airy, Romantic, and ethereal, as is the playing.


Let me give you a few examples. Tharaud begins the program with the Prelude in B minor by Bach, in an arrangement by Alexander Siloti. It has a beautifully straightforward simplicity that Tharaud executes with care. It's contemplative music at its best.


Next is the Romance sans paroles No. 3, Op. 17 by Gabriel Faure. It is lovely in its graceful lines, which Tharaud characterizes with loving care. After that is a bit of a pick-me-up with Rameau's rondo piece Les Sauvages, one of the livelier tunes on the album. Then there's Gluck's popular Dance of the Blessed Spirits, again arranged for piano by Siloti, in which Tharaud conveys a sweet and untroubled peace.


And so it goes, each little work a shining gem and, for the most part, a quiet oasis for relaxation and thought. Of course, there are also a few things like Rachmaninov's Prelude in C sharp minor No. 2, Op. 3, which in Tharaud's hands is not only powerful and dynamic but noble and exciting. 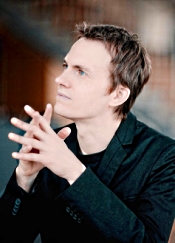 
Tharaud closes the program with piece by Bach, the Andante from his Concerto in B minor, arranged for piano by Mr. Tharaud. It has a calm, tranquil tone reminiscent of Beethoven's later Moonlight Sonata, and Tharaud’s handling of it easily points up the similarities.


The fact is, Tharaud never attempts to dazzle the listener with his technical virtuosity. I suspect it's a case of been there, done that. Here, he is only trying to reveal a part of himself in music he loves and, obviously, loves to play. It is an enjoyable package.


Erato producer and balance engineer Cecile Lenoir recorded the music at the Salle Colonne, Paris, in 2013. The piano sounds warm and cozy, with a pleasing resonant bloom on the notes. Mr. Tharaud appears to be in a spacious environment miked from a moderately close distance. The results are clear yet rounded, detailed yet smooth and natural. It's a sound that appropriately fits the nature of the music.